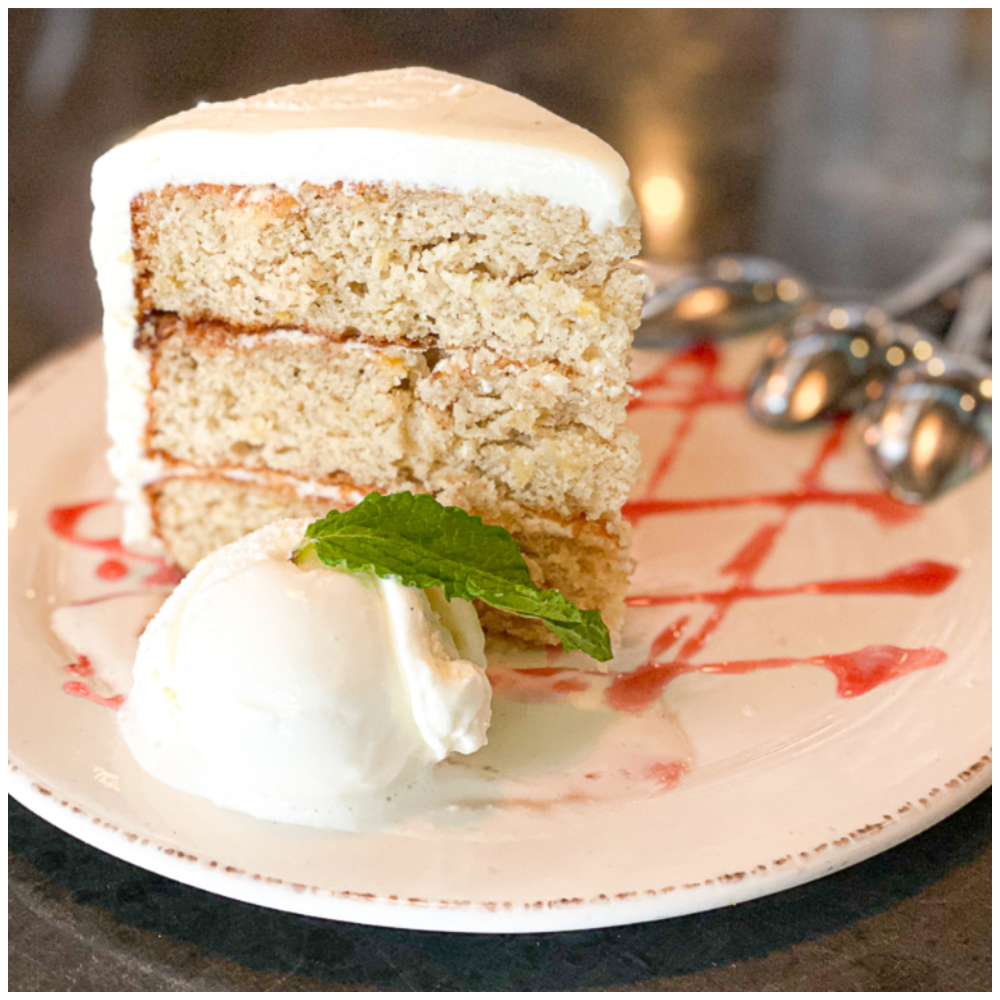 Make no mistake, Chef Art Smith’s Homecomin’ Kitchen located in Disney Springs will not disappoint. This restaurant and the menu selection is very traditional southern with some unique personal flair, so it’s a satisfying and surprising experience all at the same time. 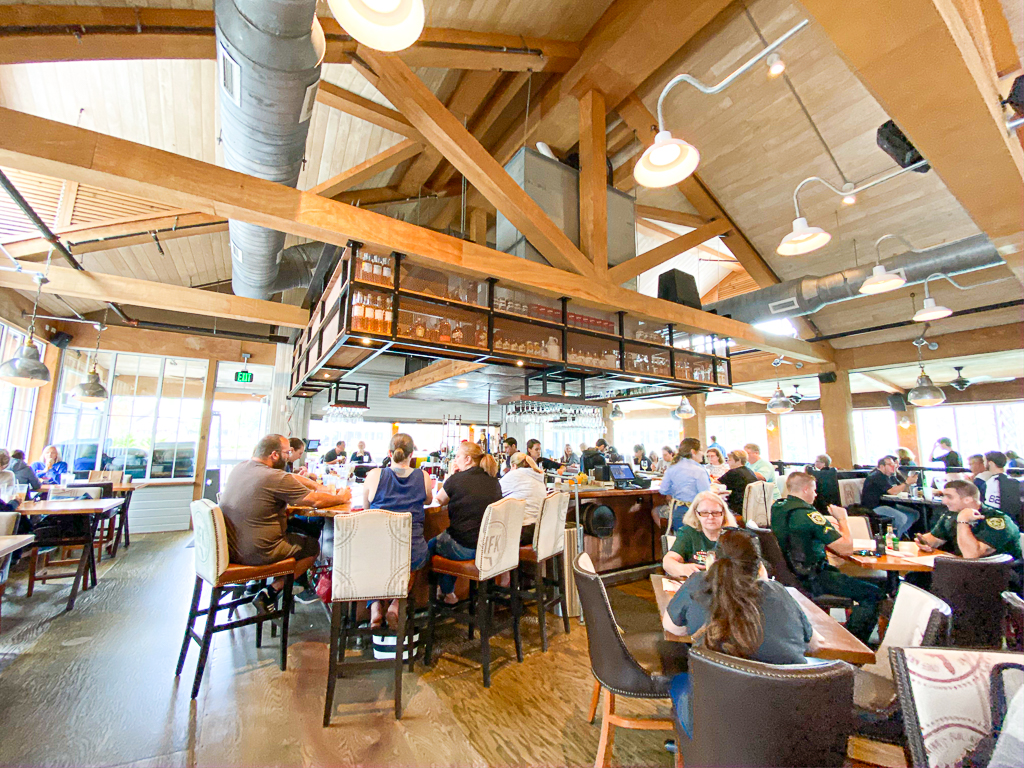 My family and I had the distinct pleasure of dining on the down-home southern hospitality at Chef Art Smith’s Homecomin’ in Disney Springs at Walt Disney World.

We were provided a complimentary meal in exchange for this review, but all opinions are our own of course! 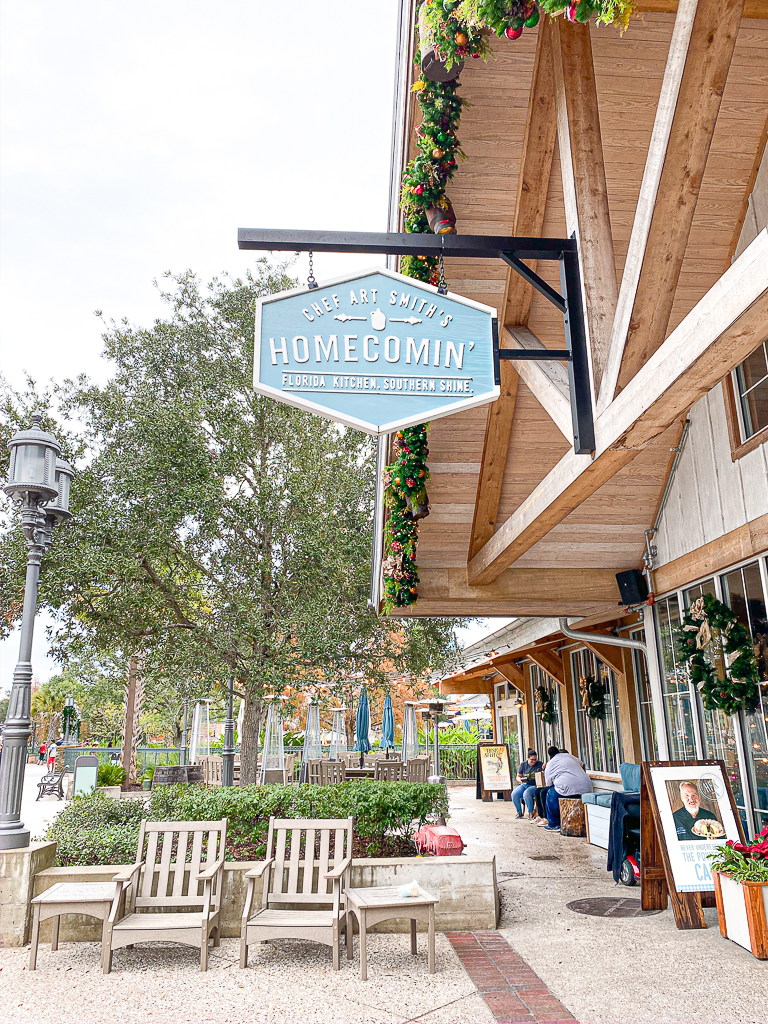 If you haven’t been to Disney World recently, there have been a lot of changes to the old Downtown Disney area. The excavated remnants of pleasure island gave way to a new outdoor mall and a wide range of fantastic restaurants.

Disney Imagineers always try to create a background for the worlds they build. When Imagineering scrapped Pleasure Island and Downtown Disney to rebrand the area as Disney Springs, they crafted a brand new story for the area. One that is told extensively through architecture and theming.

The best part of Disney Springs is the island now known as The Landing. This is the hot spot for diners who are looking for a unique restaurant experience among buildings made to look like a powerhouse, an airport, a boathouse, and an observatory.

Themes range from Irish pub to esoteric Indiana Jones references. Among the poutine, the Mexican food, the pan Asian cuisine, and the Italian food is a little slice of southern charm we had to visit for ourselves.

Not only does the cuisine hit home, but the restaurant also uses Florida ingredients as much as possible from local Florida farms, ranches, or fisheries. If season and supply changes, they will source from other American farmers too.

It was a very unifying experience as we took in our surroundings and chowed down on some of our favorite comfort food. We sat down for an early dinner and sampled as much as we could, starting with the cocktails.

We started with a couple of cocktails. For drinks, there is a large assortment of options. Not all of the beer is from Florida, but a substantial portion of the beer menu is. Half of the draft menu is Florida brewed, and one-third of the bottle and can menu also comes from local breweries. On top of those, there is a craft moonshine menu along with resort cocktails.

We had to try some moonshine, so we went with a cocktail called Moonshine Mash, and another one called an Apple Pie a la Mode. The Mash was a refreshing blend of fresh watermelon and watermelon-infused moonshine with lime juice and simple syrup. The Apple Pie a la Mode was surprisingly true to its inspiration. Apple juice and cinnamon complement the Ole Smoky Apple Pie Moonshine and vanilla vodka along with house-made simple syrup and a squeeze of lemon.

For our meal, we ordered a few starters including a Fried Chicken Salad, which was as hearty as any meal. The $18 plate included pecan smoked bacon, egg, heirloom cherry tomatoes, red onion, and cucumber over mixed greens, tossed with icebox dressing, cheddar biscuit croutons, and fresh herbs. Of course, the whole thing was topped by crispy and delicious fried chicken. 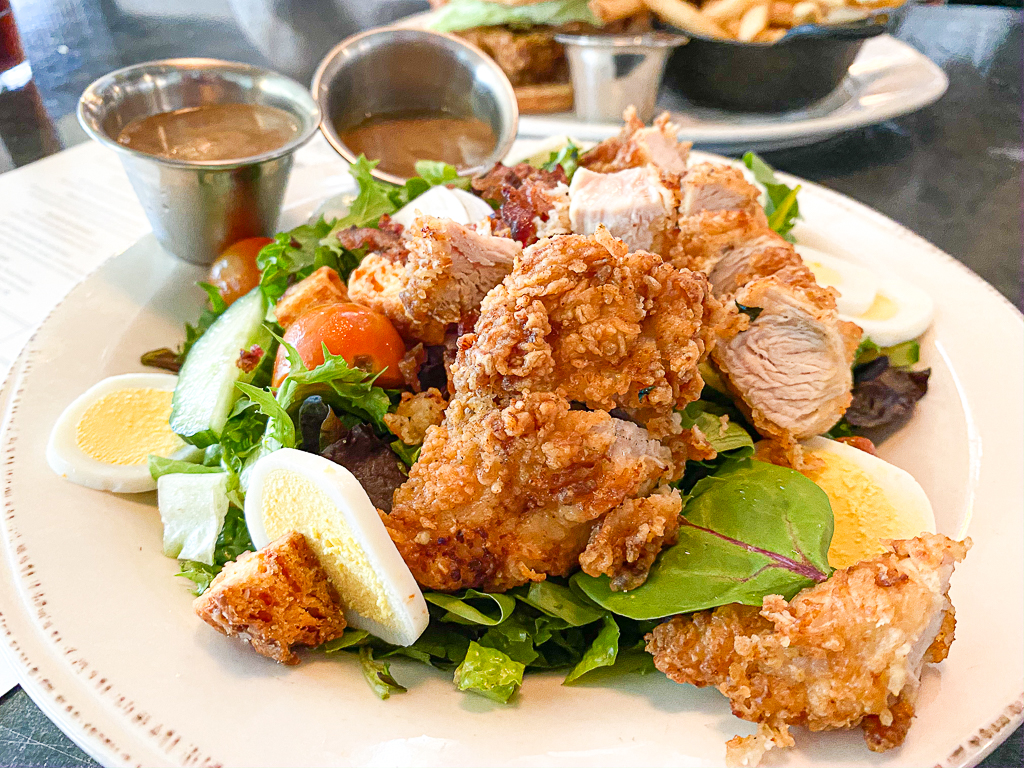 My oldest wanted to order the Thigh High Chicken Biscuits. The fried chicken at Art Smith’s Homecomin’ is unbelievable. It is served with biscuits and drizzled with hot honey. If you haven’t had fried chicken with honey, trust me, you need to start.

We only ordered one main plate from the menu that includes nine entrees.

Grilled Mahi and Shrimp was one of the lighter choices along with the Fried Egg and Avocado Toast.

Fried Chicken and Doughnuts was almost too good to pass up.

Of course, there was also the option of Fried Catfish, Pork Chop, or Chopped Pork. In the end, it was the Braised Short Ribs for $30. The rich and savory meal included fork-tender ribs served with a demi-glace sauce on mashed potatoes and green beans.

One of the Main Plates was a trio of sides. There are a lot of sides. Most of which are only $7. Among the ten options is Momma’s Mac and Cheese. You can tell a lot about a restaurant, particularly a southern one, by their mac and cheese.

This was creamy and rich with golden brown crunchy chewy deliciousness breaking free of the dish. Other menu options were just as southern, from collards to Sweet Corn Spoon Bread.

We had a second chance at the doughnuts when it came to the dessert round, but we opted for Chef Art Smith’s famous dessert, Hummingbird Cake.

The dessert comes from Chef Smith’s cookbook titled “Back to the Table,” so we had to try it, although the chocolate pecan pie was just as tempting. Another irresistible dessert option at Homecomin’ is the shine cake, which is a butter cake soaked in moonshine syrup and only available to adults. 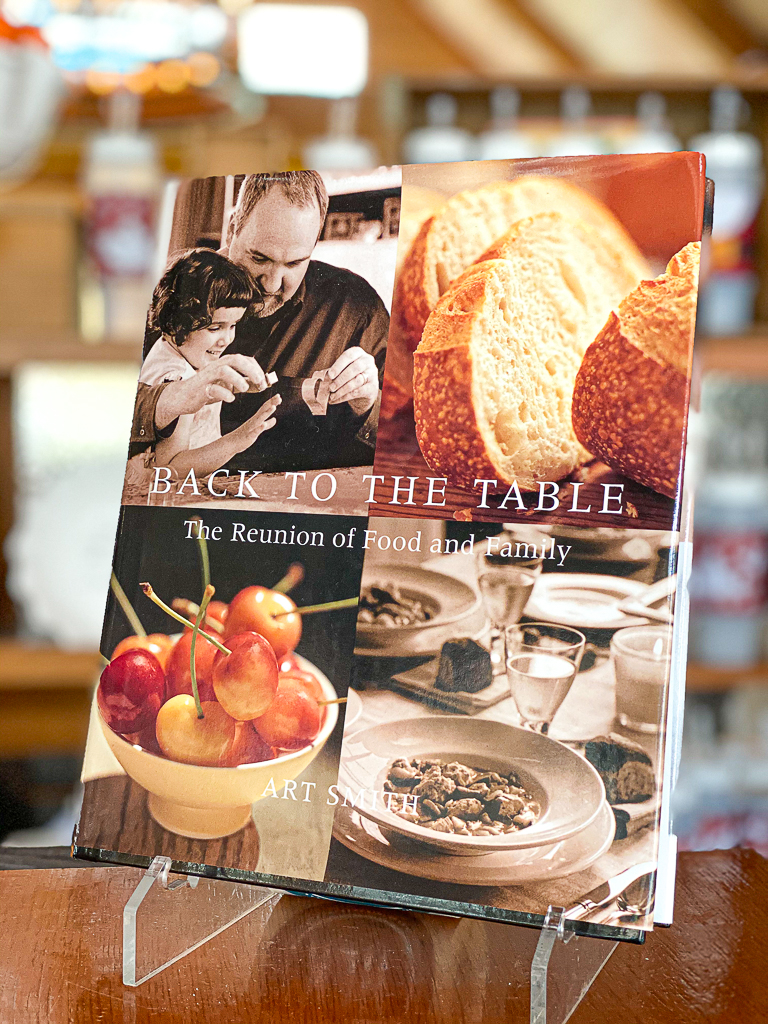 The Hummingbird Cake was $12, The Shine Cake, Chocolate Cake, and Chocolate Pecan Pie were all $11. The doughnuts, freshly made and topped with sugar, were $9.

Although my teens will argue with you that they are too big to eat off the kid’s menu, there is a kids’ menu that is somewhat specialized. It consists of a choice of $10 entree with a starch and veggies on the side and a $6 dessert of doughnuts and ice cream. The meal options include fried chicken, chicken tenders, cheeseburger, and fish sticks.

When spending the day in Disney Springs, treat you and your family to brunch, lunch or dinner at Chef Art Smith’s Homecomin’ Kitchen.  Chef Art Smith took the theming of his restaurant as seriously as Disney does, with that Florida feel and southern comfort.

Homecomin’ Kitchen is his love letter to his home state of Florida and there is no doubt it is the new favorite restaurant in Disney Springs for both tourists and locals. I know it is our new favorite and we haven’t stopped talking about it!

The food is simply delicious, and the atmosphere is true southern comfort. Who would have thought you could find a restaurant that served homemade biscuits, fried chicken and moonshine all in one place?

You will be happy to know this restaurant is a Disney Dining plan participating location (one table service credit), so I highly recommend that you make reservations in advance. 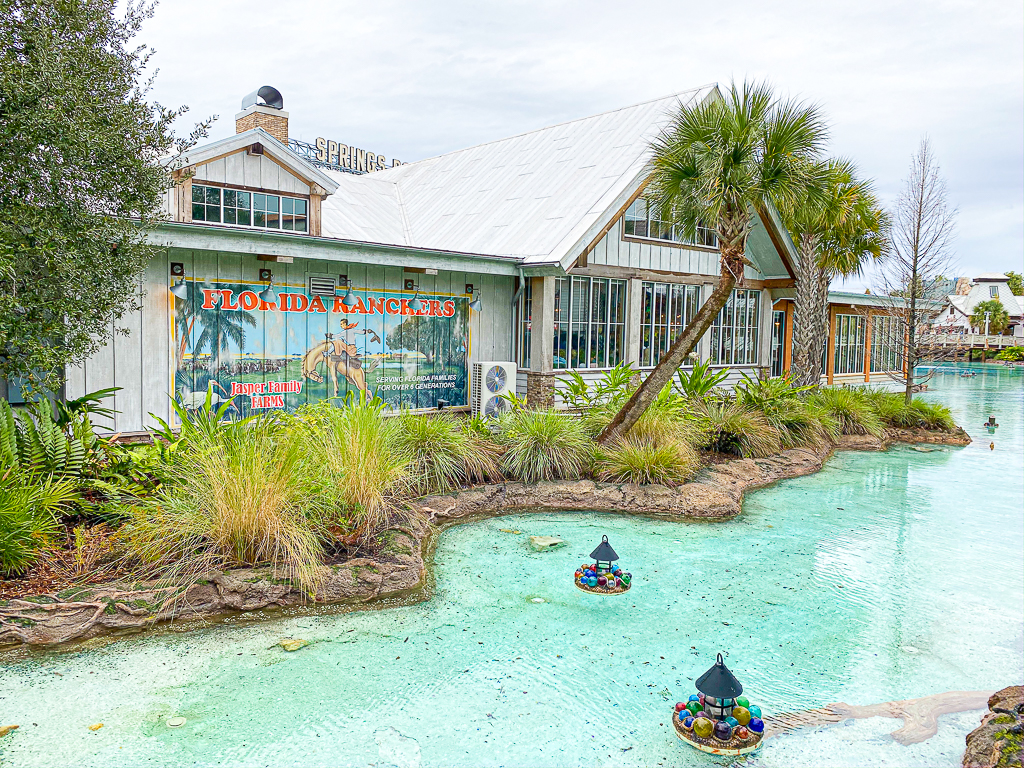 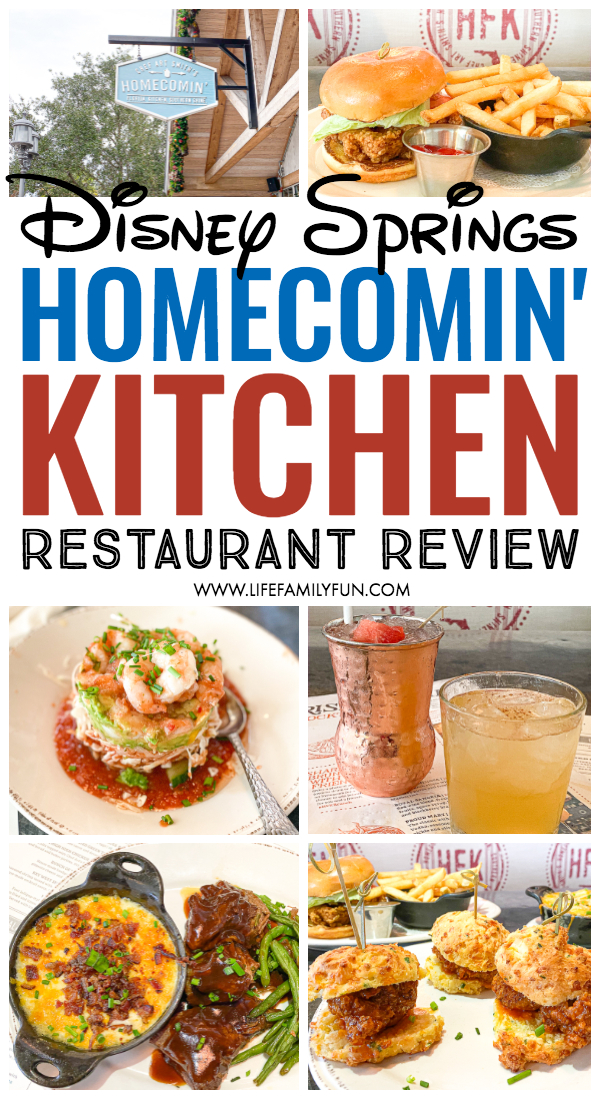 Winona is a former educator, now social media and marketing strategist, writer, travel expert, and founder of Life Family & Fun, a national blog focusing on Family, Food, Home & DIY, Lifestyle, Disney and Family Travel. She loves to inspire families to travel more and enjoy life fully.  They have a blended family with four children and four adorable grandboys and have been happily married for 16 years.  For collaboration, please email [email protected] Read more.

Work With LifeFamilyFun.com | Start A Blog | Advertising Disclosure | Data Protection & Privacy Policy
LifeFamilyFun.com is a participant in the Amazon Services LLC Associates Program, an affiliate advertising program designed to provide a means for sites to earn advertising fees by advertising and linking to amazon.com. LifeFamilyFun.com makes no claims of expert status and the owner will not be liable for any losses, injuries, or damages from the use of the information found on this website.
This website uses cookies to improve your experience. We'll assume you're ok with this, but you can opt-out if you wish.Accept Reject Read More
Privacy & Cookies Policy
Necessary Always Enabled