Home » 15 Fun Things to Do in Atlanta
Atlanta, Georgia

Atlanta, Georgia is an action-packed city with lots of fun things to do. This state capital is one of the biggest and most well-known cities in the country. There’s no shortage of attractions, and no matter what you like to do for fun, you’ll find Atlanta enjoyable.

It has relaxing experiences for adults and thrilling adventures for kids and teens. Here are 15 of the city’s highly rated attractions, but these are just the beginning of fun things you can do in Atlanta.

Coca-Cola was first invented in Atlanta in 1886, and the headquarters still remain in the city today. Thus, the World of Coca-Cola is a big attraction in Atlanta, especially if you’re a fan of the fizzy drink. The World of Coca-Cola is a tribute to the popular soda brand, with plenty of unique Coca-Cola inspired activities. You can learn how the beverage is made and packaged, watch a 4D movie about the soda, and even create your own Coca-Cola drink. And, of course, you’ll get to sample Coca-Cola products from all over the world. When it comes to popular products like soda brands, there’s so much more than meets the eye.

The Georgia Aquarium is not your average aquarium. It was once the largest aquarium in the world, and today it’s the only one outside of Asia that has a whale shark. Whale sharks are massive sea creatures that require a 24,000 cubic meter tank, so the rest of the attraction had to be built around that one giant habitat. In total, this aquarium has about 100,000 different animals, 700 of which are unique species. Some other notable creatures you’ll find are beluga whales, sea turtles, sea otters, and sea lions. The animals alone are exciting to look at, but there are also plenty of videos and displays to help further your education about ocean life.

Centennial Olympic Park is one of the most fun things to do in Atlanta because it’s the heart of downtown with plenty of exciting sights. It’s within walking distance of many major attractions, including World of Coca-Cola and the Georgia Aquarium. Near the park’s visitor center, there’s a famous computer-controlled fountain with over 250 jets that can shoot water. The park also has 22 acres of sculptures, greenery, and other peaceful sights. Being such a popular area, it’s also a key location for events, so you may find fireworks and concerts at this park on occasion.

The Atlanta Botanical Garden isn’t just a gorgeous nature space, but it’s also a work of art. It’s a 30-acre attraction that’s located within Piedmont Park. It has a wide range of themed spaces, including topiary sculptures, a canopy walk, and a children’s area. Not only will you see beautiful plants like orchids, roses, and herbs, but you might also get to see live animals like koi, frogs, and turtles. This attraction even has some seasonal events, such as a light show during the winter months. You could spend all day in this tropical oasis if you wanted, and there’s even dining on-site.

The High Museum of Art is known as the best collection of art in all of the southeastern United States. It has a permanent collection of over 15,000 pieces, and thousands more in its rotating exhibits. Plus, the building itself looks like a work of art, with lots of geometric parts sticking out artistically. Even if you’re not an art person, it can be a peaceful indoor activity for you and your family to enjoy. On certain days, they even have art classes for kids to try out.

The Civil Rights Movement and Martin Luther King Jr. have a big significance in Atlanta. So, the Martin Luther King Jr. National Historical Park celebrates both using monuments, museums, and resource centers. This park takes up over 35 acres of downtown Atlanta, and it’s the perfect place to learn some history and feel inspired. In the park, you’ll find the tomb of Dr. King and his wife, along with a reflecting pool and an eternal flame. Nearby, you’ll also find many other important attractions, including his birth home. Additionally, you can join a walking tour, which will take you to lots of Atlanta’s historical landmarks while learning more about Dr. King’s life and legacy.

Tiny Doors ATL is a more obscure attraction. It’s an art project around Atlanta that involves tiny doors that are properly sized for a dollhouse. You can find these doors scattered throughout the city, and they’re all designed by different artists. All of them are made in unique styles, with some being simple paintings and others being complex sculptures. Finding all of them is kind of like a big scavenger hunt around the city. If you want to make sure you catch them all, there’s a map online showing where all the doors are located.

Atlanta is a busy city, so green spaces can be tricky to find. If you’re looking to escape the city and spend time surrounded by nature, Piedmont Park is the perfect place to do so. The park takes up 185 acres right in the city. Skyscrapers surround the green space, making the most mesmerizing views. Piedmont Park has miles of trails for walking or biking, along with plenty of sports fields for other types of exercises. Events are often hosted in the park too, including camps, classes, and festivals. This is one of the best parks for families in Atlanta.

Fun Spot Atlanta is one of the best things to do in this city if you have kids. It’s about a 30 minute drive from the downtown, but it’s a visitor favorite due to its many rides and attractions. It features everything from intense roller coasters to kid-friendly carousels. It also has other unique activities like go-karts, lasertag, an arcade, and mini golf. Of course, you’ll find plenty of dining and shopping on-site as well, allowing you to spend all day there if you’d like. So, whether you’re a thrill-seeker or not, there’s more than enough to do at this amusement park.

Like the Georgia Aquarium, Zoo Atlanta is more unique than other attractions of its kind. This zoo is most known for its giant pandas because Georgia is one of only four states that have a zoo with these cuddly-looking creatures. But of course, there are plenty of other popular animals to see, including elephants, lions, and Komodo dragons. It also has an impressive reptile and amphibian exhibit, with over 100 snakes, turtles, lizards, frogs, salamanders, and more. Zoos are always a favorite for kids, but adults can have a good time too. In fact, this zoo often has happy hour events just to make sure the parents have a great time too.

Some people adore puppets while others are a little uneasy about them. But at the Center for Puppetry Arts in Georgia, there’s lots to love! Puppet museums aren’t a common attraction, so this one is possibly the largest of its kind in the whole world. You won’t be able to find this many large puppets anywhere else. Not only will you learn a lot about the puppet industry, but you’ll also see many familiar faces, like Kermit and Elmo. In fact, there is a large permanent collection of Jim Henson puppets, which means many of the Muppets will be present. There’s even an interactive “create your own puppet” exhibit that’s a favorite for young children.

A state capitol building might not sound like one of the most fun things to do in Atlanta, but once you see it, you’ll be in awe. Like all capitol buildings, the Georgia State Capitol has impressive architecture that will amaze you even if you’re not interested in politics. This building is most notable for the gold dome on top, but the structure is beautiful both inside and out. You’ll find lots of statues and green spaces outside, and lots of educational displays, galleries, and exhibits inside. On the weekdays, the building is open to the public, so you can go inside and explore on your own.

Legos are always adored by young visitors, so the Legoland Discovery Center is a big hit for families in Atlanta. It has a variety of exciting attractions, including Lego building zones, play areas, a 4D theater, and even a ride. Not to mention that there are plenty of Lego displays throughout the experience, and even a gift shop at the end. This is also a fully indoor attraction, so it’s often preferred by guests during the hottest days of summer. If you have a kid who’s creative, this Lego experience will likely be one of the most fun things to do in Atlanta for them.

At first glance, the Ponce City Market just looks like a random factory building in the city. But inside, it’s a must-see experience. It’s the perfect stop if you need a bite to eat because it has endless options for dining, whether you’re looking for a full meal, a snack, or even just a drink. The restaurants also greatly vary from grab-and-go dining to sit-down places. You can also take an elevator to the roof the building, where you can see beautiful views of the city, hang out at a beer garden, or play games like mini golf. The reason the building is so massive is that it also has apartments in some of the upper floors.

Atlanta is also the home of the CNN headquarters, and you can even go inside! The CNN studio tour is the perfect way to go behind the scenes and see how news is made. On your own, you can ride up the longest freestanding escalator in the world, which takes you up above the action to give you a bird’s eye view of cameras, newsrooms, and reporters. But if you want to know a little more about how the process works, you can take a 50-minute tour of the facility for a special look at some of the private areas. And maybe you’ll even meet some famous people along the way!

There’s no shortage of fun things to do in Atlanta. This list of 15 items was just the beginning, and there’s certainly more to explore. So, if you’re planning a family-friendly trip to Atlanta, Georgia, don’t forget to plan ahead. You’ll probably want a detailed itinerary to make sure you don’t miss out on any of these exciting events. Your trip to Georgia will be a vacation you’ll never forget! 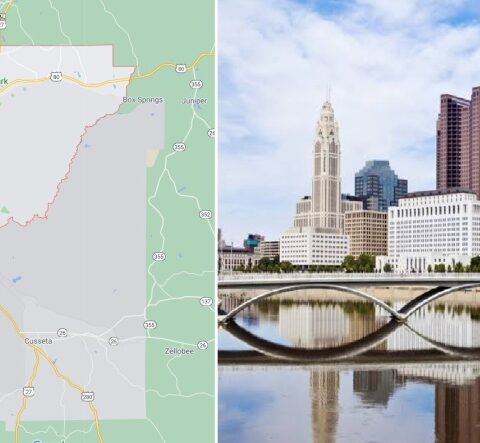 Family Fun Things To Do In Columbus, Georgia