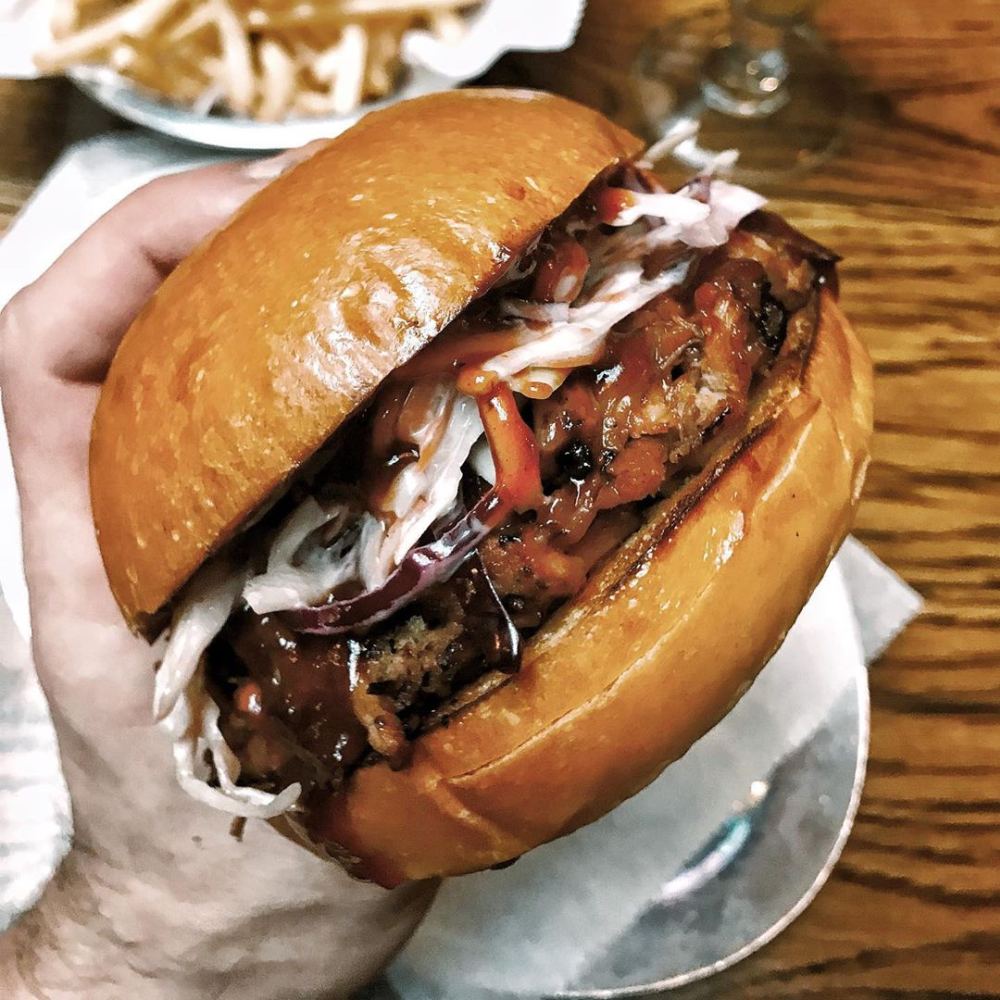 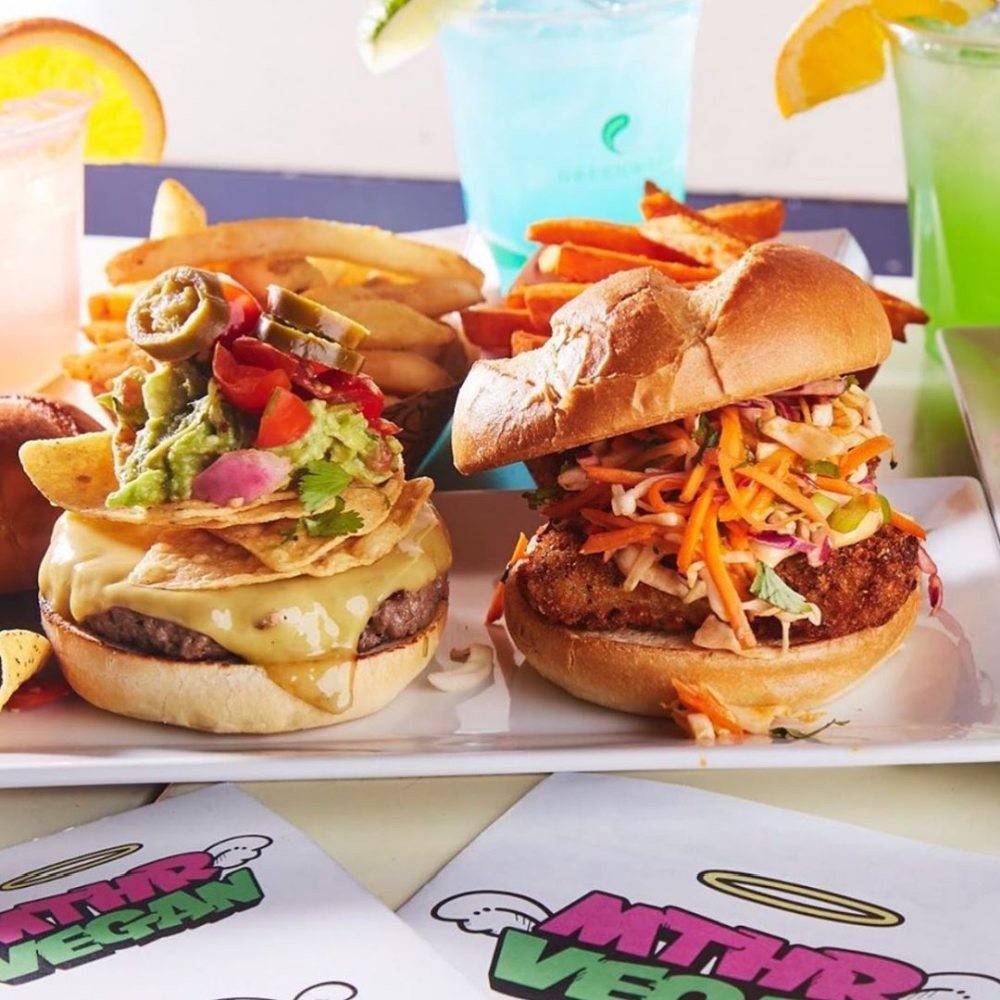 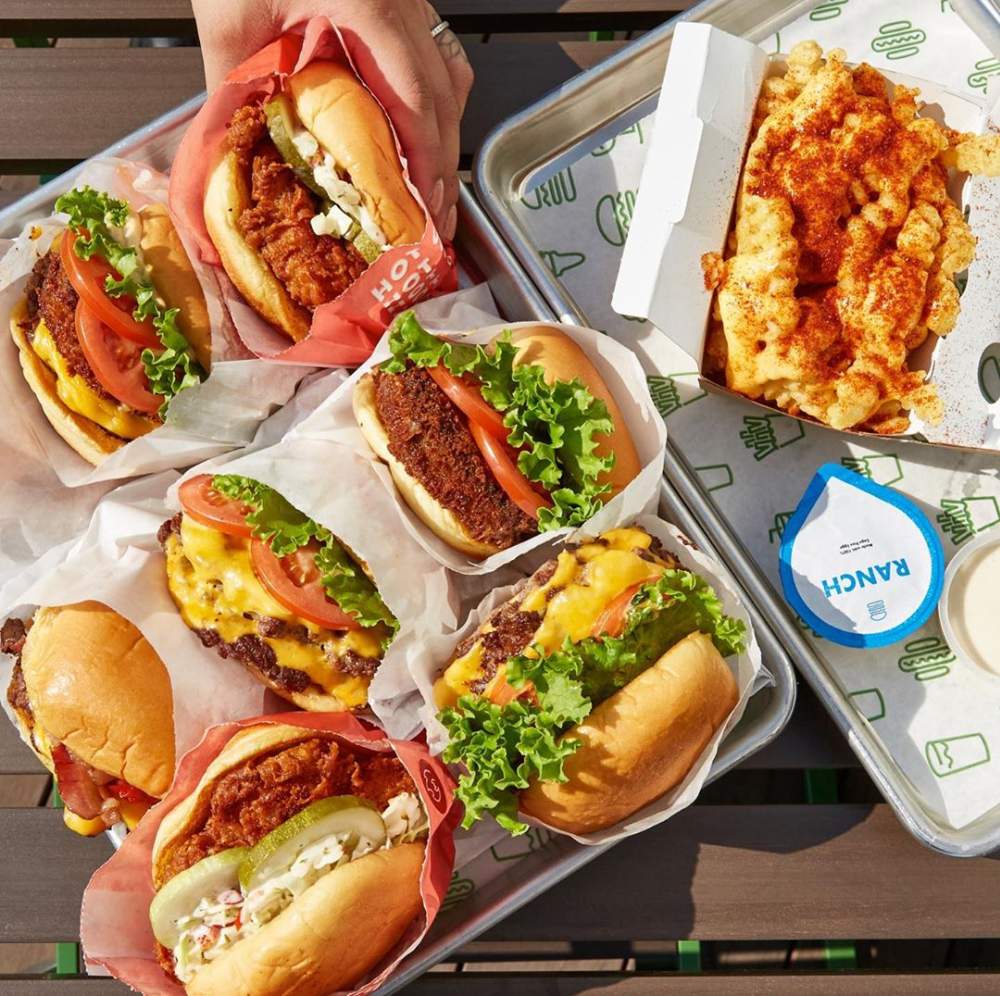 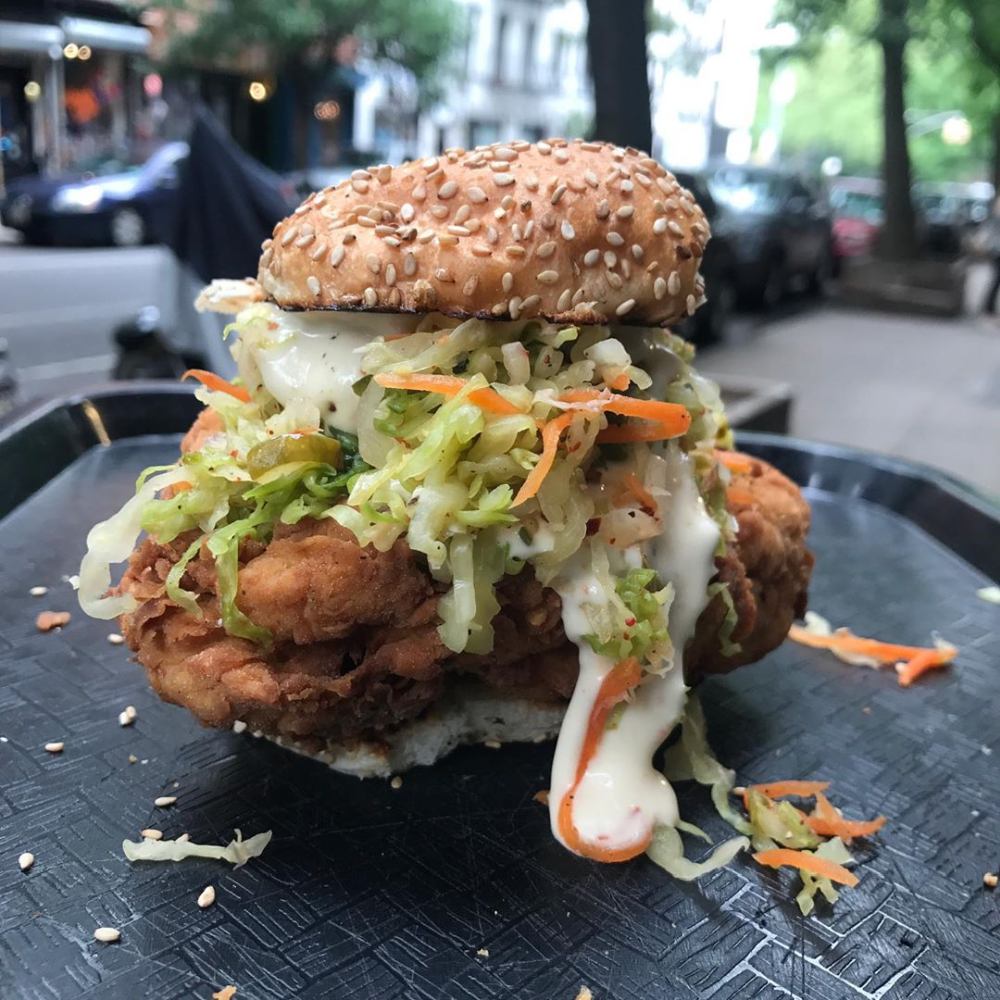 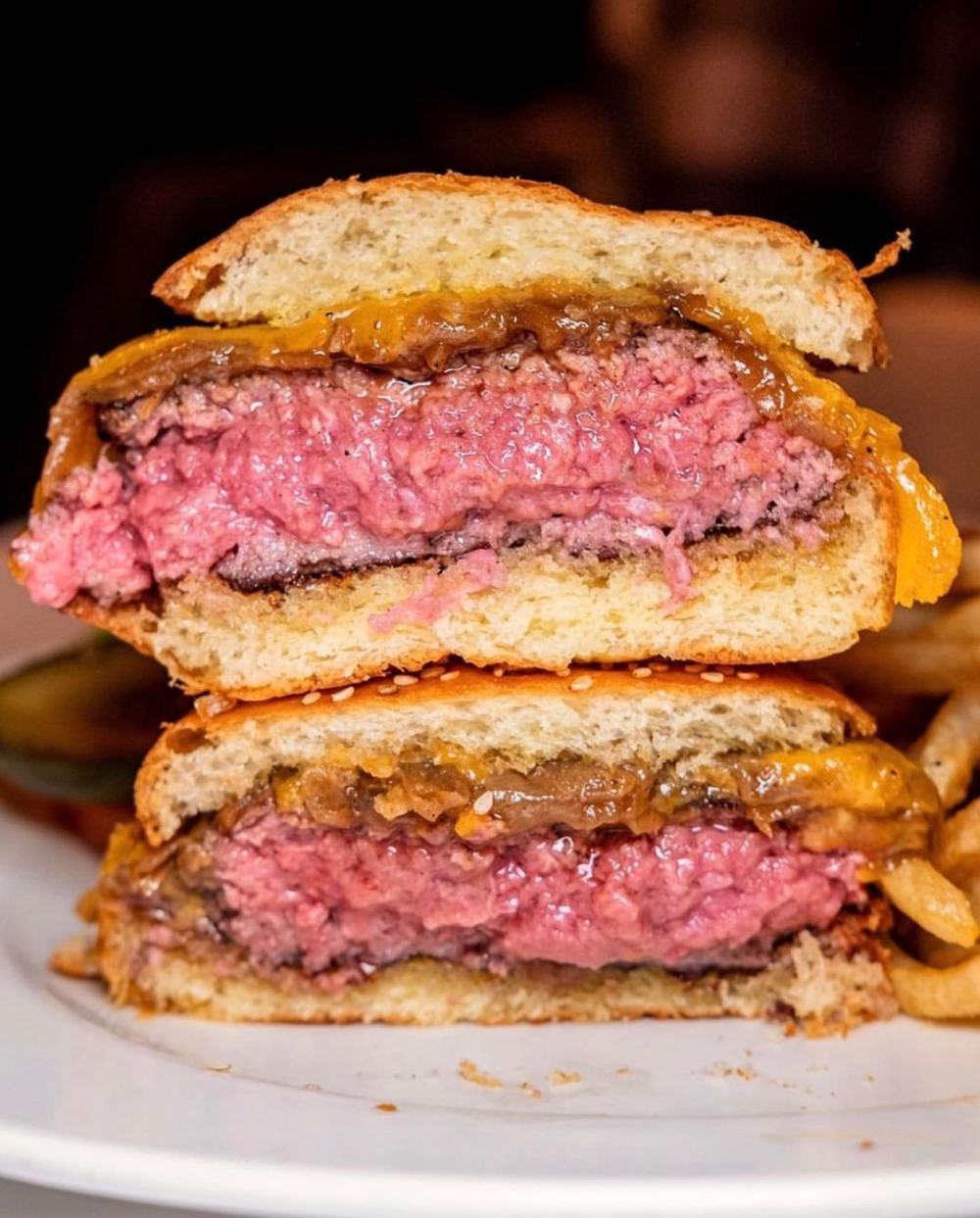 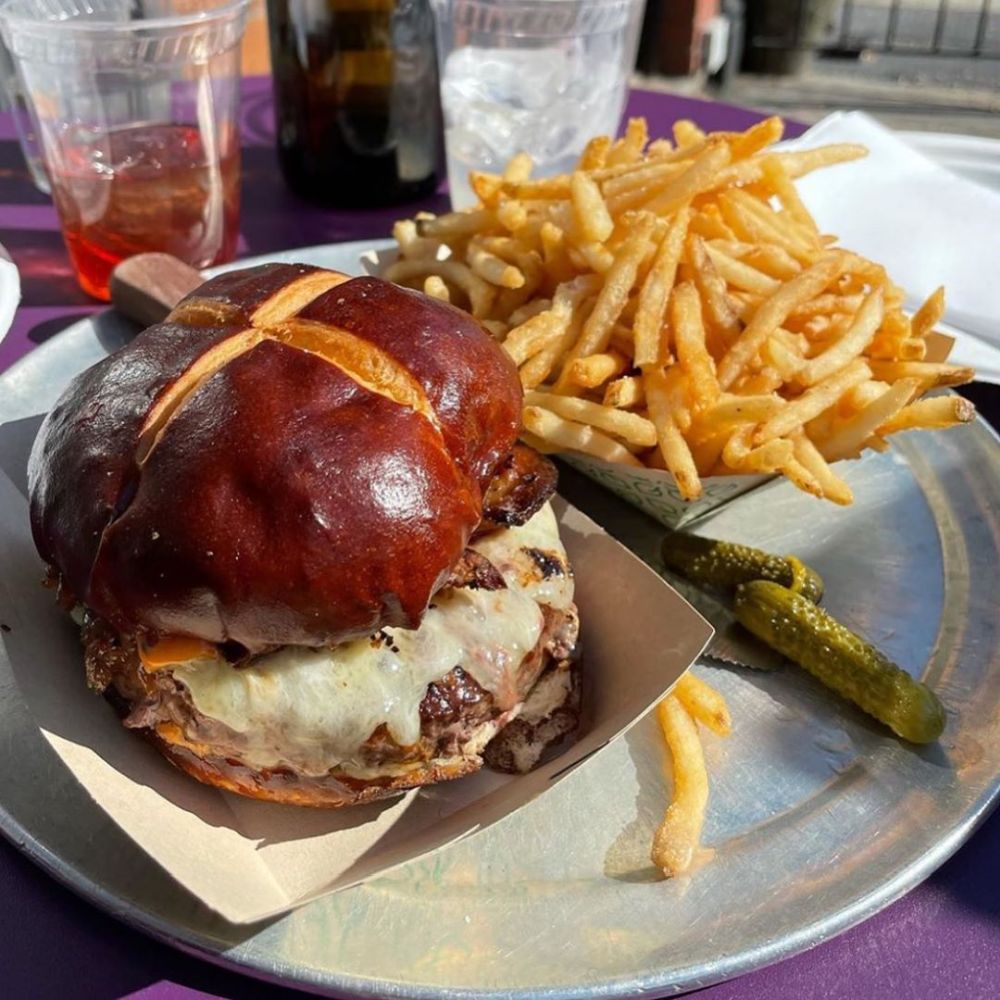 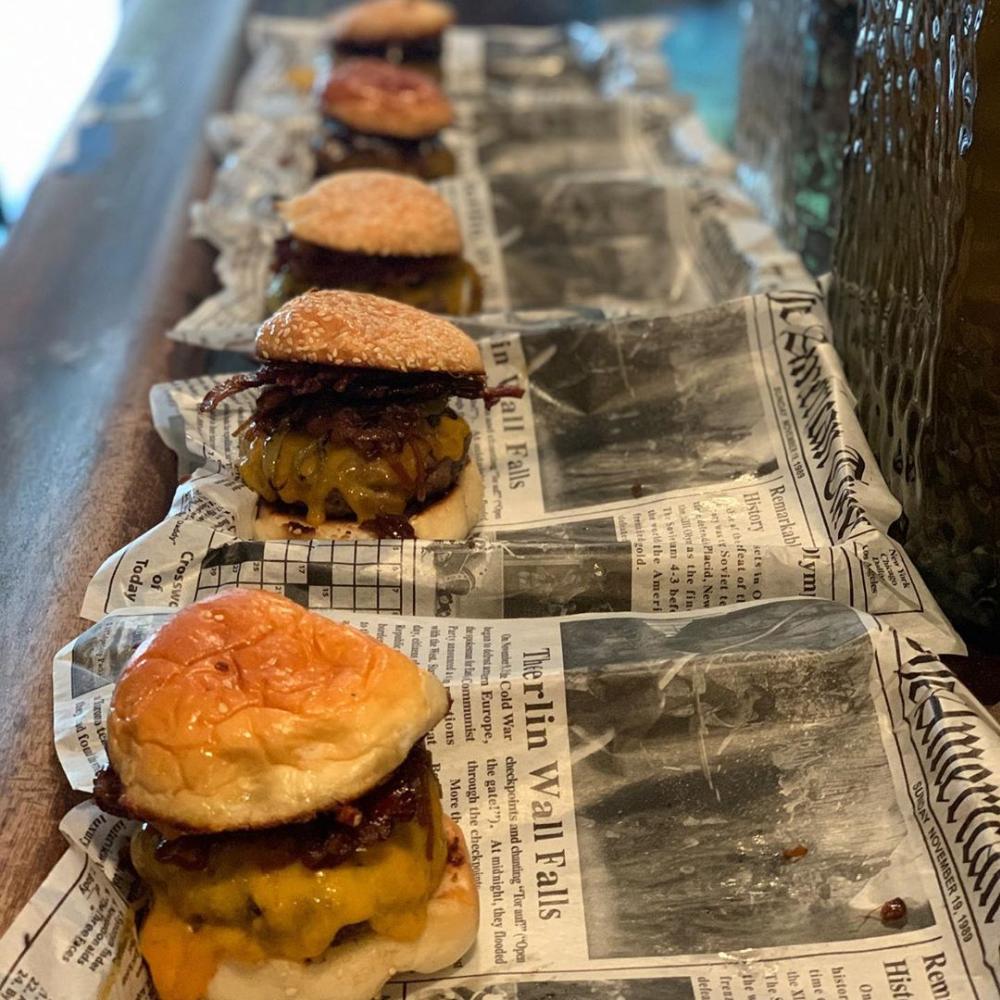 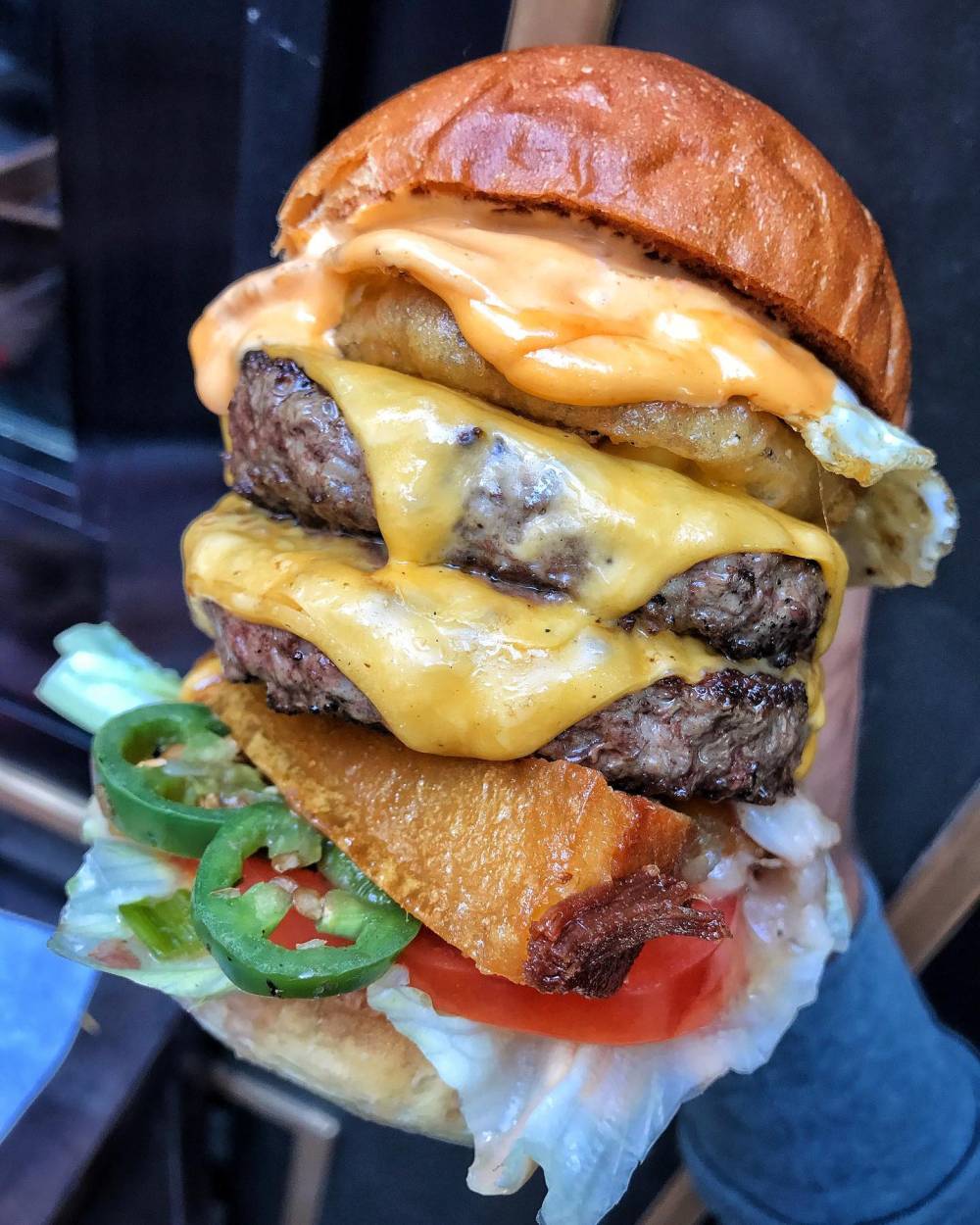 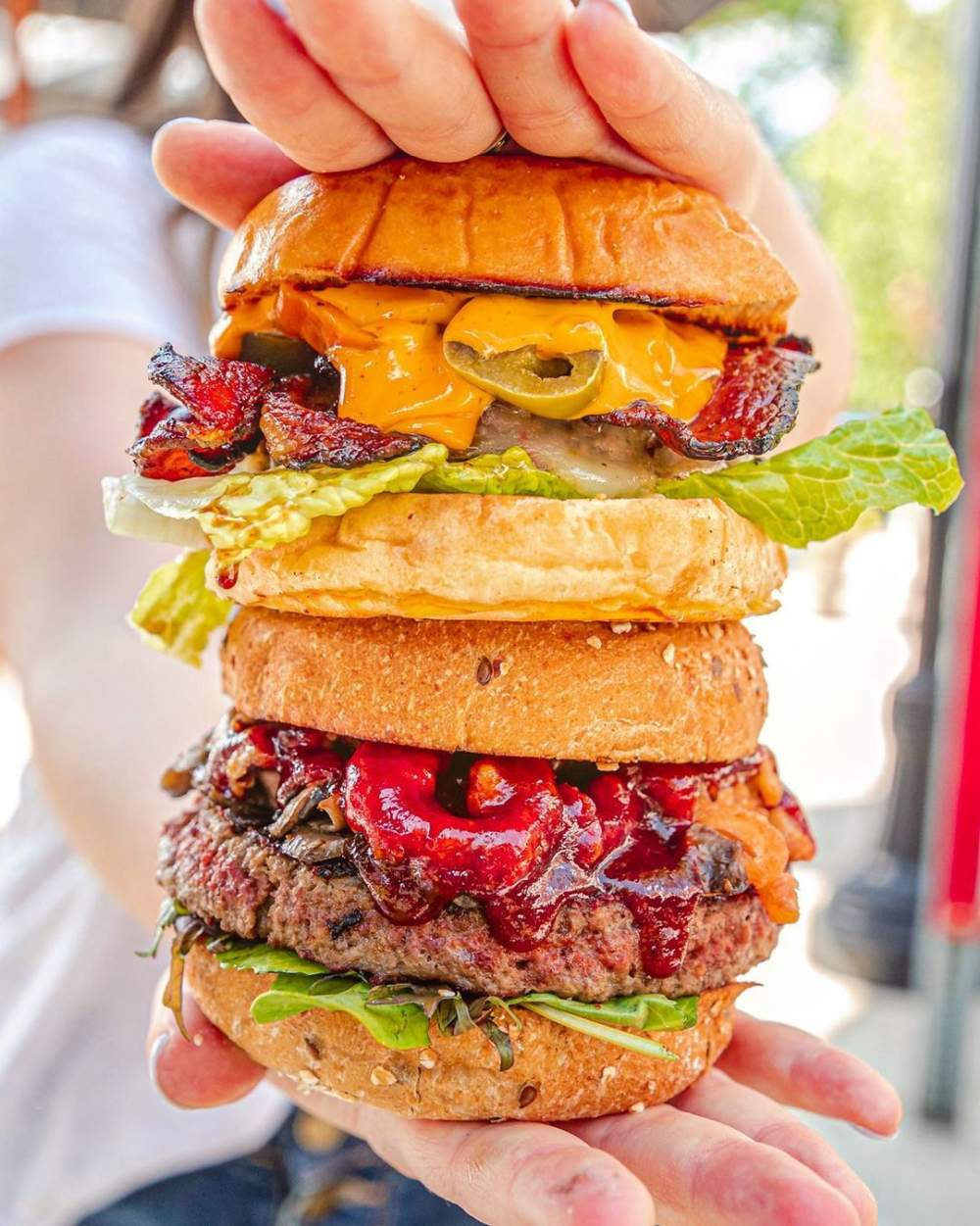 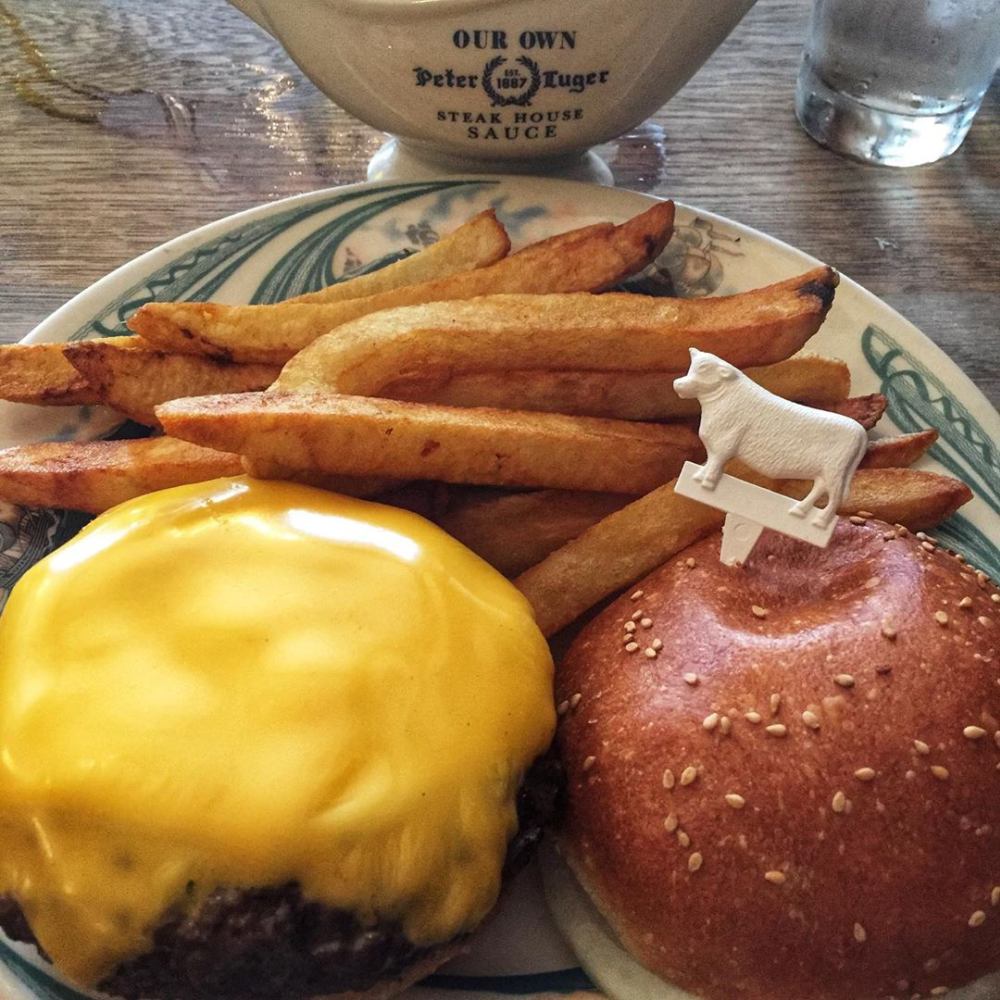 The beauty of New York City’s food scene is its plethora of options for everything from pizza and bagels to Korean or Indian. So it’s no surprise that locals and tourists alike can easily find a burger that they’ll love in almost every neighborhood. Whether they want the classic, all the toppings they can fit, or something with no meat or dairy, all versions of this American staple are super easy to find.

So, considering how many fantastic options there are within all five boroughs, you can imagine how hard it was to narrow this list down. Chances are you’ll either find your favorite on here or be inspired to try something new and tasty. Either way, your mouth will definitely be watering as soon as you’re done reading.

Here’s where you can find some of the best burgers in New York City:

It became an East Village favorite after its founding in 2008 and, after a few setbacks, has since expanded to six locations around Manhattan and Brooklyn. Black Iron Burger prides itself on two things: providing healthier, all-natural options and bringing multicultural flavors to an American classic. Now owned and operated by native Spaniards, their smaller portions and distinct elements of Mediterranean cooking make them stand out amongst a tidal wave of competition.

With sixteen burger options on the menu, it can be hard to pick which one to order. The Black Iron is relatively simple, the Mediterranean almost sounds like it shouldn’t work but does, and the Chistorra is like taking a bite out of Spain. But we say the Mushroom Truffle, complete with Swiss cheese, bacon bits, truffle tapenade, and truffle mayo, is a definite must-try.

Sidenote: their Midtown West and Park Slope locations are the only ones that are fully operational during the current COVID-19 pandemic.

Of course, we couldn’t forget about all our plant-based readers while making this list. As the name implies, MTHR Vegan serves up 100% cruelty-free dishes that are both delicious and extremely charitable. A portion of each purchase is donated to the Woodstock Farm Sanctuary, helping them rescue over 400 animals to date.

Although they offer plenty to choose from, including tacos and vegan wings, their burgers are still the most popular. Their Beyond Classic and Classically Impossible burgers taste like the real thing, as does their Chicken Fried Tofu burger. And when it’s finally lunch time, you can turn any one of them into a combo by pairing it with fries or a side salad and a soda of your choice.

What started out as a Madison Square Park hot dog cart back in 2001 has become both a New York City staple and a global phenomenon almost two decades later. At all 275 of their locations, especially in its home state, Shake Shack’s fresh-made food and hand-spun milkshakes bring in long lines even during the winter time. Although their menu has changed and expanded over the years, it’s their simple and classic ShackBurger that’s still the biggest crowd-pleaser.

A 100% Angus beef patty is topped off with American cheese, lettuce, and tomato, drizzled with their special ShackSauce, and served on a gluten-free Martin’s potato roll. You could even make it a double if you’re really hungry. Pair it with crinkle-cut fries and any one of their signature shakes, and you’re all set for your afternoon lunch in the park.

Another one for the plant-lovers, this all-vegetarian hot-spot is a must-try take-out joint for anyone who’s cruelty-free. Their menu might be limited to just four meals, two drinks, and gelato or sorbet, but everything is delicious, healthy, and very affordable. Of course, what really lands them on so many “best of” lists is the meatiness of its signature veggie burger.

Known as the Superiority burger, each patty is made by blending lentils, quinoa, and black beans. After they’re molded and grilled, they’re topped with muenster cheese, iceberg lettuce, tomato, and a dill pickle. And vegans need not worry, as they’ve got a version made just for you, too.

This old celebrity favorite has been described as a “Parisian steakhouse meets a classic New York City tavern,” and we couldn’t agree more. Located in the East Village, Minetta Tavern draws you in with its vintage decor and keeps you hooked with everything from traditional French dishes to the most succulent meats you’ve ever tasted. And if all you want is a burger, then they have two exquisite, and expensive, options to choose from.

Their Black Label Burger is the more popular and pricier of the two, made from prime dry-aged Pat LaFrieda beef, topped off with caramelized onions, and served on a toasted brioche bun. The less expensive Minetta Burger combines short rib, brisket, and shoulder clod into a single patty that’s topped off with real cheddar cheese then given the same onions and toasted bun, Of course, neither one would be complete without a side of their much-loved pomme frites.

Emily is one of those once-in-a-lifetime restaurants that absolutely excels at everything it creates. All of their pizzas are top-rated, and their Korean-style wings are the perfect pairing for any happy hour. But one look at their online reviews and you’ll see that their Emmy burger is the real star at both their Clinton Hill and West Village locations.

All of their patties are made using dry-aged LaFrieda beef, then topped with American cheese, caramelized onions, and pickles, then placed on a soft pretzel bun. Then a nice drizzle of Emily’s secret sauce is added to really set it apart from the rest. And because no burger would be complete without them, each one is served with a side of curly fries.

It may be on the pricey side at $26, but we say it’s totally worth it just to treat yourself. Although we should warn you that they don’t make any modifications to this dish, to be warned if you have dietary restrictions.

Royale claims to have the best burger in New York City, and judging by their reviews it looks like their customers agree. This Alphabet City staple uses lean ground Black Angus, and some of that juicy beef fat, to make their basic yet namesake dish. Once it’s given the usual fixings, a brioche bun, and a side of steak fries, all you’ll need is one of their draft beers and a seat out on their back patio for a perfect happy hour.

If a basic Royale just doesn’t cut it, you can order the Royal with Cheese, Bacon Royale, Double Royale, or even the Veggie Royale. And they take that Pulp Fiction theme even further with the Marcellus Wallace, just in case you want something truly special. Each one is topped off with arugula, caramelized onions, maytag bleu and gruyere cheeses, and a dash of truffle salt.

And even if that’s still not enough for you, they’ve got a whole list of other tasty additions for an extra charge. Some of our favorites include avocado, sauteed mushrooms, or a helping of their gluten-free beef chili.

It may be a literal hole in the wall, but this Chinatown dive knows its stuff when it comes to good bar food. Although it’s mostly known for its equally amazing taco platter, Breakroom also has two incredible burgers on the menu for you to choose from. Whether you want to keep things simple or pile on the toppings, we’re sure that either one will satisfy completely.

The Classic burger features a 6 oz. LaFrieda beef patty topped with American cheese, lettuce, tomato, onion, and Breakroom’s special sauce on a locally-sourced bun. The Breakroom burger takes things to the next level by adding a cube of pork belly, a tempura onion ring, a sunny-side-up egg, and jalapenos.

It all began in a vacant Astoria bakery in 2009 and quickly grew into both a New York City favorite and a revolutionary burger chain. Bareburger prides itself on using high-quality ingredients that are both organic and ethically sourced, which has earned it a spot among the top 10 most sustainable restaurants in the United States. Even so, they wouldn’t be where they are today if their food wasn’t super delicious.

Their extensive burger menu caters to almost every pallet, from fans of the classics to those with dietary restrictions. Occasionally they’ll have more exotic meats on the menu, such as elk or bison, that you can add on for a custom order. Furthermore, those who are entirely plant-based have four different and amazing vegan options to choose from, including the ever-popular Impossible Burger.

While they have lots to choose from, including a wide range of salads and some tasty chicken sandwiches, it’s wonderful to know that anyone can enjoy a basic burger here.

This one shouldn’t come as a surprise. Considering just how seriously they take their beef at Peter Luger, it’s no surprise that this world famous steakhouse also makes an incredible burger. They still use the same meticulous dry-aging process as they did when they opened in 1887, so their burger is kept extremely simple; a thick 8 oz. patty made from chopped USDA prime on a locally-sourced sesame seed bun. That’s right, there’s no need for onions, pickles, or even a secret sauce to amp it up.

You could add a slice of American cheese for an extra $1.50 or bacon for $4.50, but many reviewers say not to even bother. The rich and juicy flavor of the beef is so satisfying, you’ll hesitate to even top it off with ketchup. The thick-cut fries, on the other hand, are well worth the additional charge of $3.95. 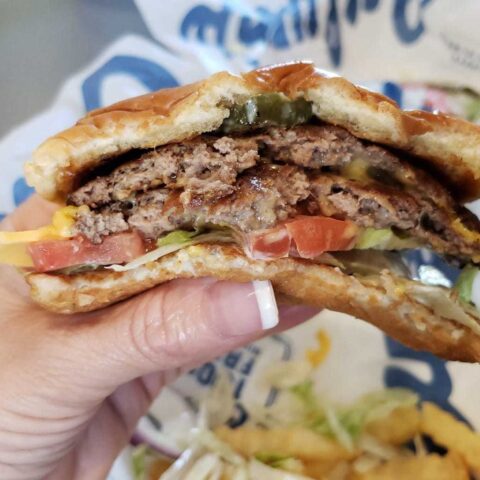 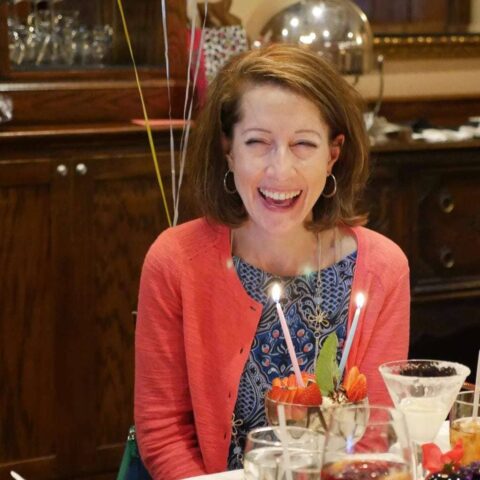 Celebrate Love With Maggiano’s Little Italy For Your Special Occasion