Rum punch is the kind of cocktail that mentally transports you to a warm, sunny beach at the first sip. Combining the exotic flavor of rum with tropical fruit juices and a zip of lime, this delectable fruity rum drink is ideal for any event or occasion. 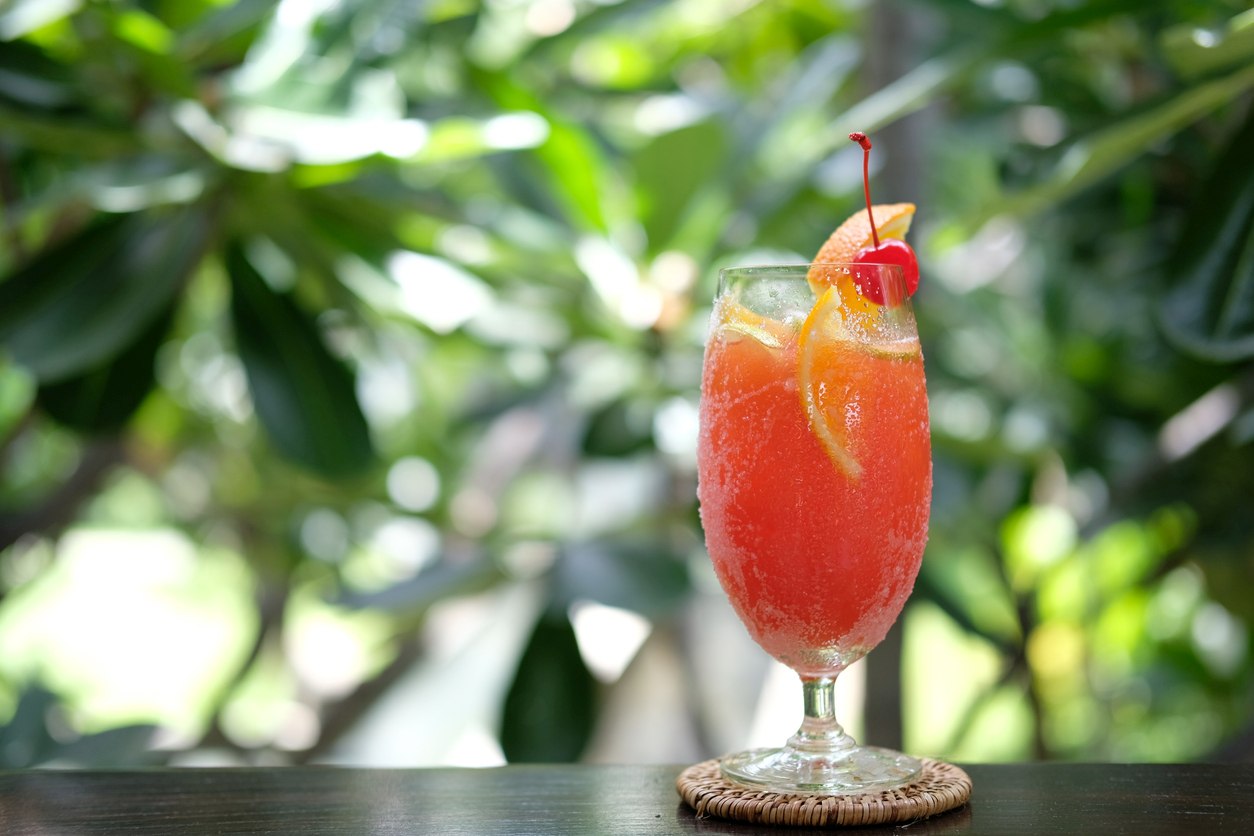 It is the kind of cocktail you can garnish with any type of fresh fruit to add more fun and flavor to your sipping experience.

Just like with all the best cocktails, a rum punch recipe can be modified to fit your taste. You can use both light and dark rum, or choose one. Pineapple, orange and lime juice are good, or you could use just the orange juice with a zip of lemon or lime.

A splash of grenadine adds a fruity flavor, and then you can add fruit garnishes to finish it off in style.

The History of Rum Punch

This drink has a very interesting history, although it is not known for sure where the name ‘punch’ originates from. One theory is that it comes from the Hindi word for ‘five’ because some recipes have five ingredients. Another theory claims that it is named after a puncheon, which is a wide, short, 500-liter rum barrel.

The first known reference to punch is from 1632 while the first rum punch recipe dates back to 1638. A German gentleman managing an Indian factory reported that the locals made a drink with aqua vitae (a strong liquor), rosewater, lemon juice and sugar. Britain’s first colonial rums were extremely strong, so fruit juices and other ingredients were added to tame them.

Over time, sailors introduced rum punch recipes to London, and rum punch became a favorite drink of the aristocrats. The ingredients used to make the early versions (lemon, sugar and rum) were very expensive in those days because they had to travel so far, and the upper classes used to show off their ornate crystal punch bowl and cups at rum punch parties.

Punch did fall out of favor for a while, but now with all the classics making a strong comeback, everyone wants to know how to make rum punch again! So, whether you are having a party, entertaining friends or simply craving an exotic beverage to sip while you sit back and relax, rum punch is always an excellent choice.

As well as both dark and light rum, our recipe calls for pineapple, oranges and lime juices, along with a touch of grenadine. Try to use freshly squeezed orange and lime juices if you can, because it just gives the rum punch a fresher flavor.

Feel free to adjust the quantities to your palate, and serve this in a hurricane glass if you have one, or a 20-ounce glass if not, over plenty of ice cubes. 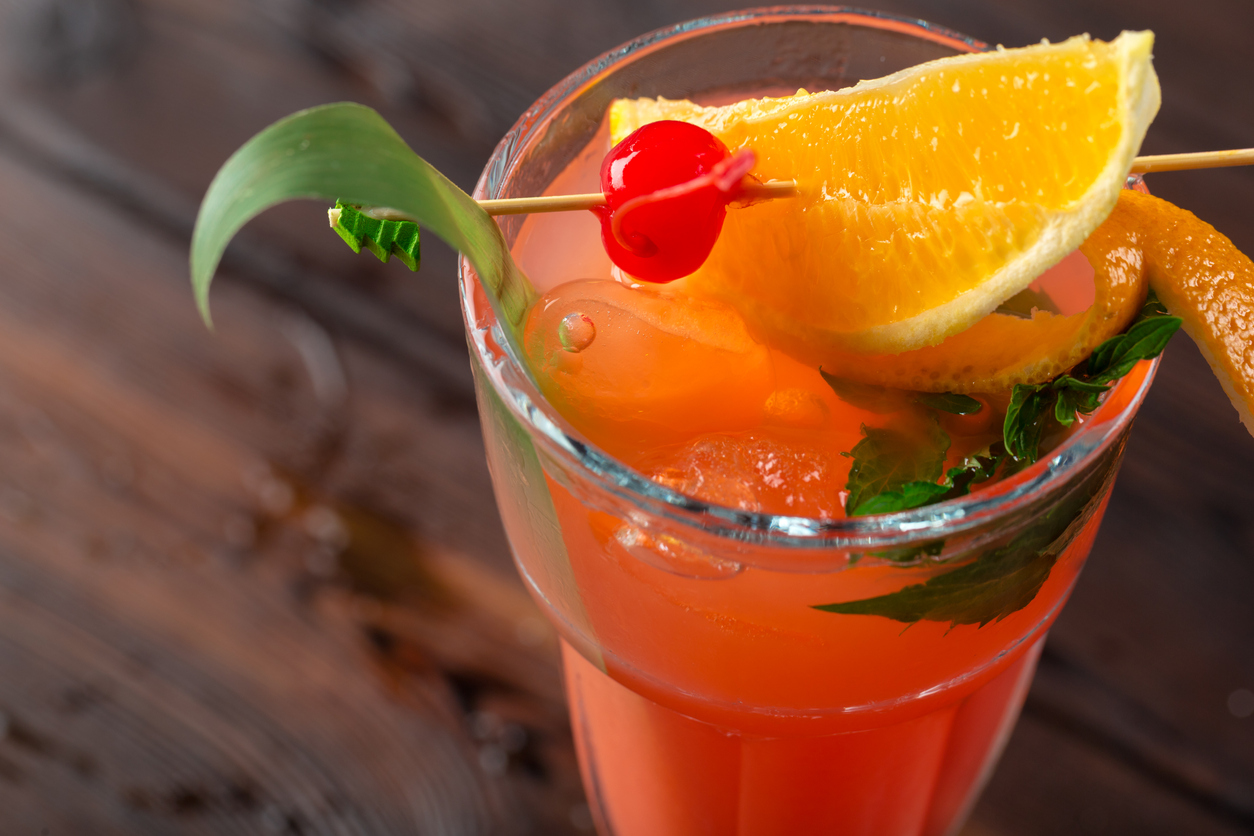 What You Need for alcoholic rum punch recipe:

How to Make It A Rum Punch: 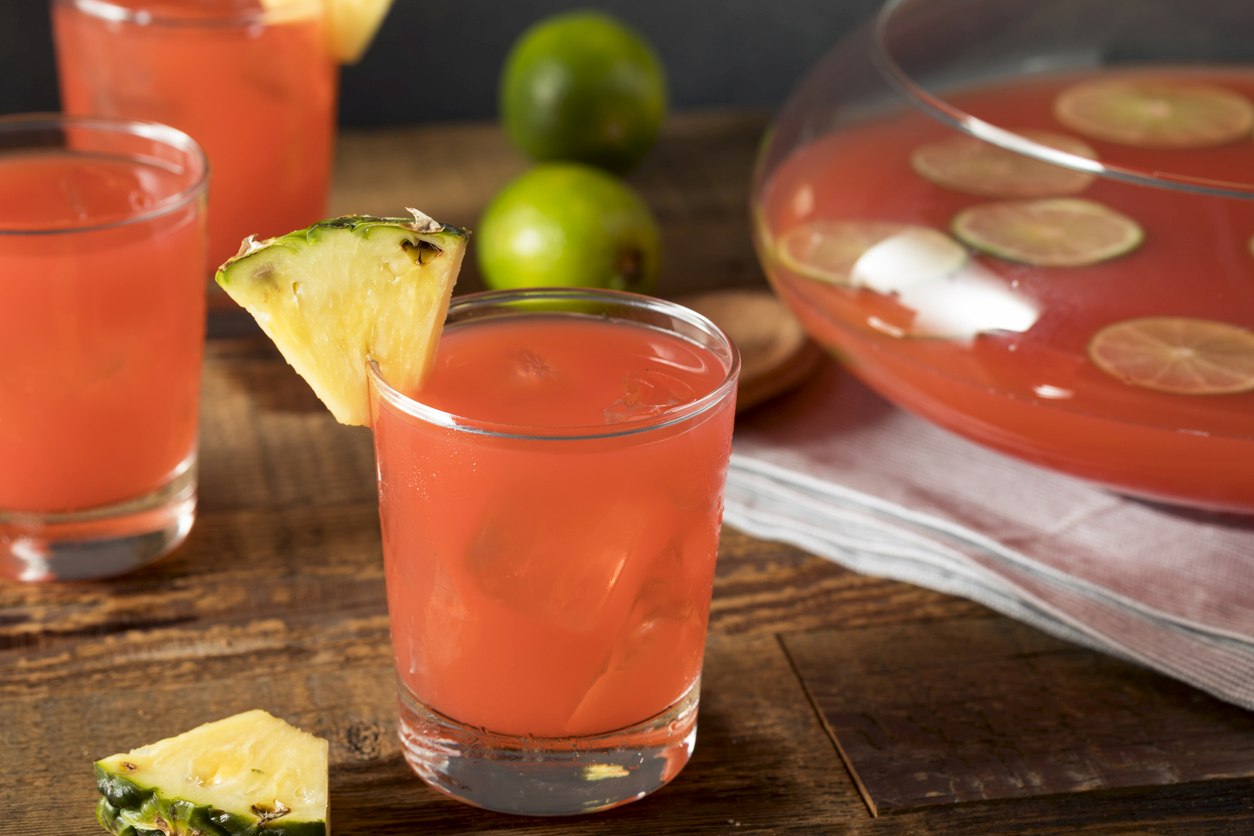 Since there are already many different ways of making rum punch, including the classic one above, it is worth exploring how else you can make this tropical treat. Let’s take a look at a few popular variations:

Bacardi rum punch: To make this version, you can simply switch the dark rum and light rum for Bacardi. Of course, Bacardi is a brand of white rum (light rum) but if it happens to be your preferred tipple, go ahead and use it to make your next punch.

Jamaican rum punch: Are you more of a fan of dark rum than its lighter cousin? No problem – simply use dark rum instead of light rum for a more potent tasting cocktail.

Malibu rum punch: Malibu isn’t a type of rum exactly, but it is a rum-based coconut liqueur, categorized as ‘flavored rum’ in some places. With half the alcohol content of dark or light rum, feel free to throw in a hearty splash! 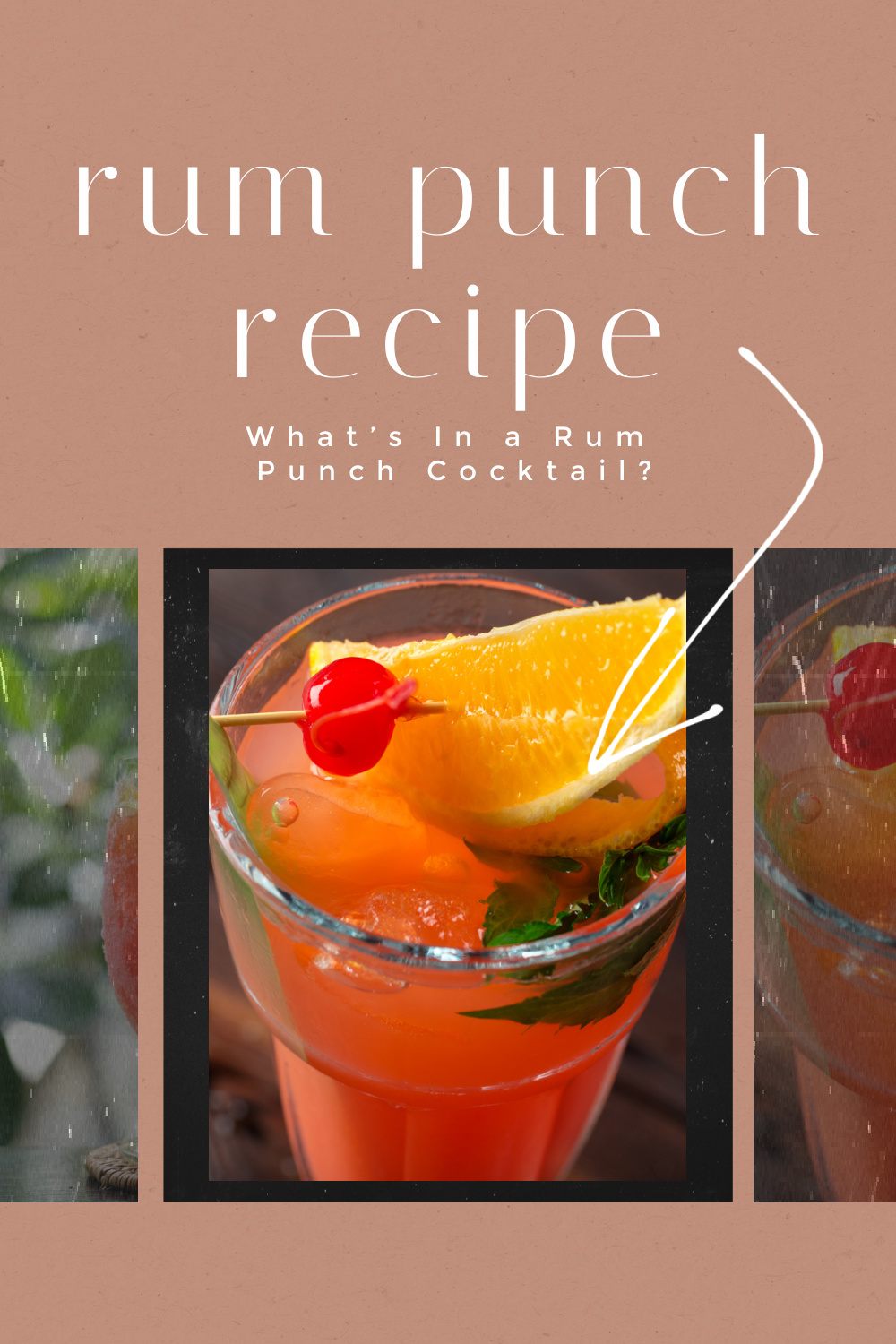 Q: What kind of glass should you serve rum punch in?

A: Rum punch can be served in any glass you have, but it most often comes in a hurricane glass. This type of glass holds 20 ounces and is named for the ‘hurricane’ glass dome put over a candlestick to stop it from blowing out in the wind, since they are a similar shape.

Q: What is grenadine?

A: Grenadine is an ingredient often found in rum punch recipes. It is a non-alcoholic bar syrup blending sweet and bitter flavors. Traditionally made from pomegranate, grenadine is used in a variety of cocktail recipes, to add flavor as well as a red or pinkish color.

Q: What is Planter’s Punch?

A: Often seen on cocktail menus, this is a rum punch variation made with dark rum, fruit juice (orange, passion fruit or pineapple), grenadine and typically a splash of club soda. The origin is disputed but it might have been created at the Planter’s Hotel in St Louis in 1908.

Q: How do you make rum punch for a crowd?

A: This one is easy! Simply multiply the above recipe for however many party guests you have coming, then serve it in a punch bowl so people can help themselves.

Q: Can you make a rum punch recipe in advance?

A: If you want to make it ahead, simply combine the main ingredients and keep the mixture in the refrigerator. Don’t add any fruit garnishes until just before serving.

Q: What else can I use for a garnish?

A: The garnish is totally up to you. Try some frozen lemon, orange or lime slices, or perhaps thread some on a little skewer and balance it on top of the glass. Maraschino or brandied cherries are nice garnishes for a rum punch recipe. 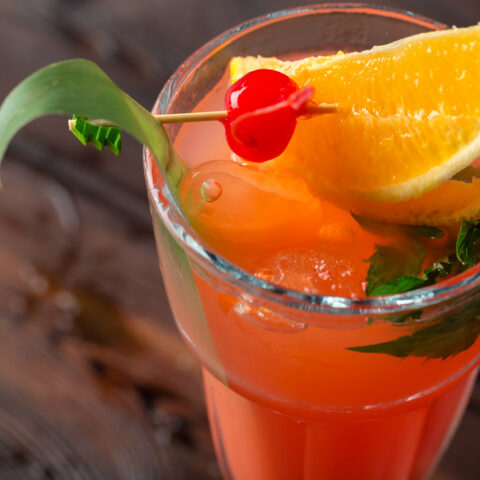 Just like with all the best cocktails, a rum punch recipe can be modified to fit your taste. You can use both light and dark rum, or choose one.
Course Appetizer
Cuisine American
Prep Time 10 minutes
Cook Time 10 minutes
Servings 1 1
Calories 150kcal 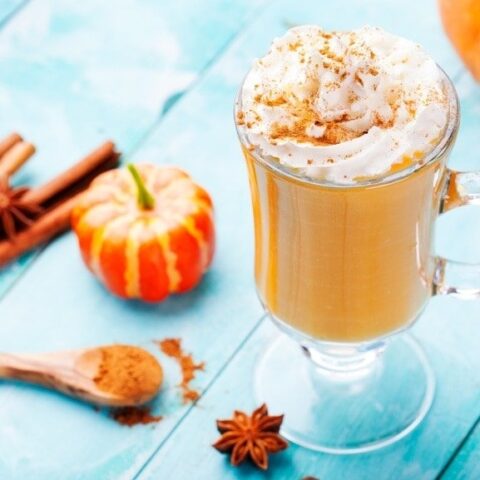 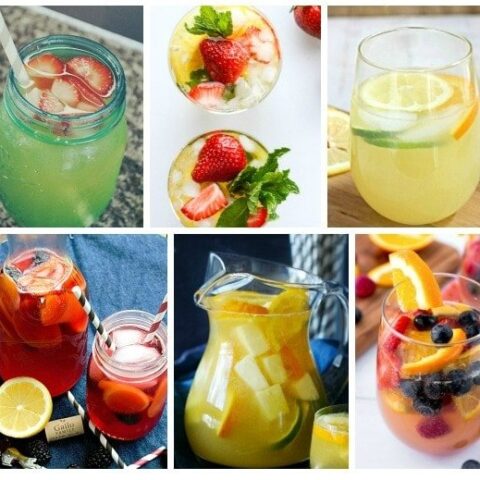 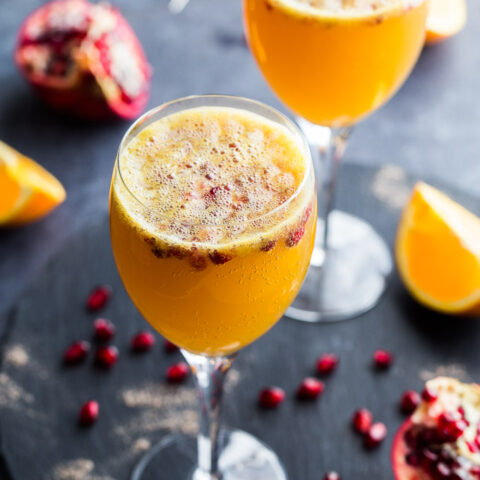