Mushrooms have a meaty and juicy texture that we just can’t ignore. As a vegan or even as a meat-eater that wants to change up dinner habits for a bit, making this dish with Portobello steak and mashed potatoes is something that you have to try. It’s simple to make, most of the ingredients are already in your household, and you can enjoy enhanced taste of the mushrooms and the potatoes by adding your favourite spices. 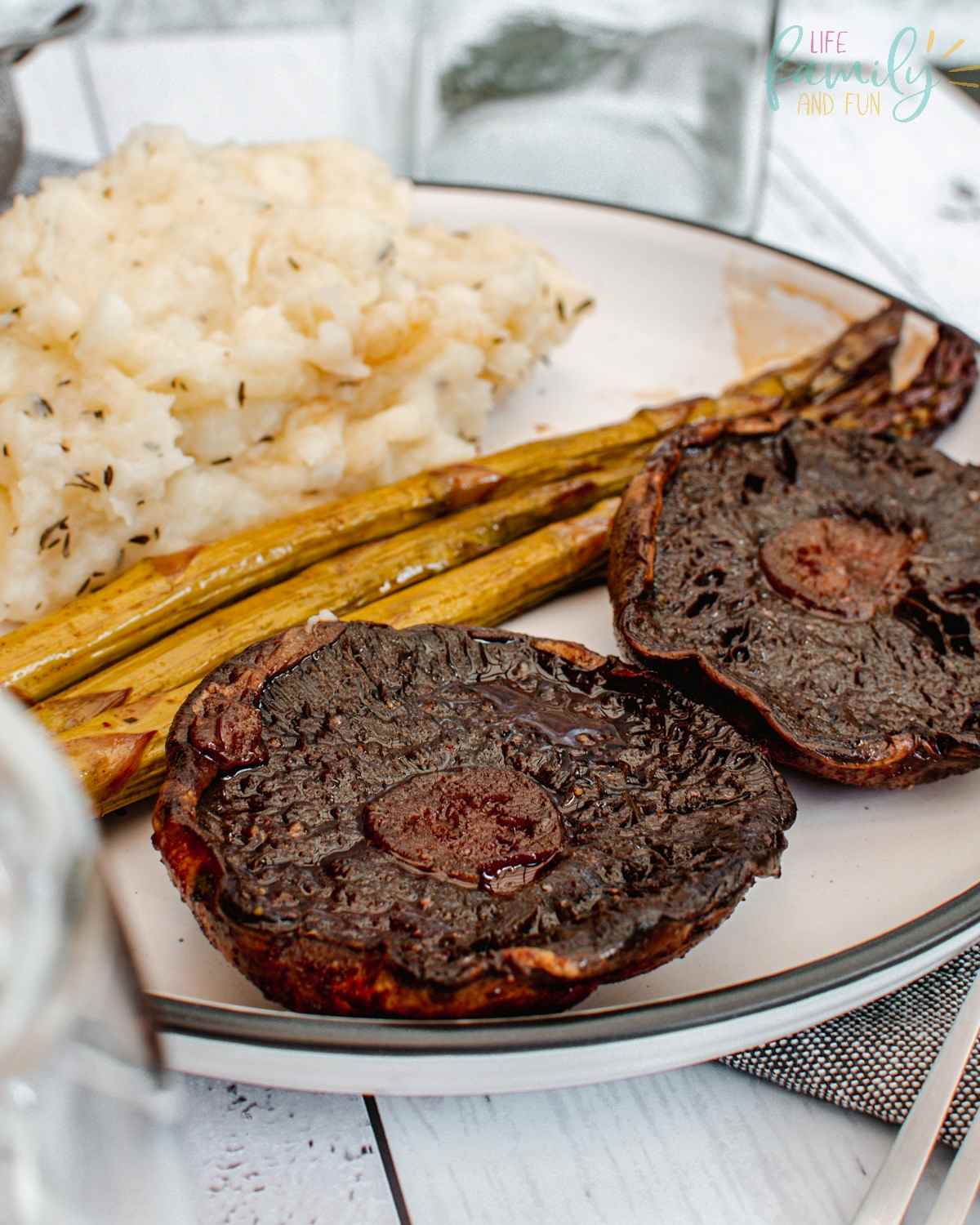 About the Vegan Portobello Mushroom Steak

Also known as Portabella or Portobello, these mushrooms have meaty texture that quickly made them a vegan-favourite ingredient for different dishes. These mushrooms are available all year round, since Portobello is basically the mature version of the common mushroom.

In the United States alone, the Portobello mushroom account for 90 percent of the country’s mushroom production. Oddly enough, this mushroom was quite unpopular in the past because of its large size. It was only in 1980 that people started to take interest in this ingredient because it was marketed as a healthy alternative to meat-based dishes.

As some of you may have already guessed, the Portobello mushroom has Italian roots and people have been growing it since ancient times. However, the first record of this mushroom dates back to 1707, by French botanist Joseph Pitton de Tournefort.

The mushrooms can be recognized due to their large and flat cap that has a round shape and measure roughly 15 cm in a diameter. The caps have a very smooth texture and have different colors that range from tan to brown. They are connected to a thick stem and, if you look under the cap, you will notice fleshy gills that have a brown color. When cooked, these mushrooms are often described as having a meaty texture and an earthy flavour.

Portobello mushrooms are usually stored in rooms where temperature can be easily controlled, as they need a steady humidity level and constant airflow to stay fresh for as long as possible.

This mushroom has plenty of nutritional value, having niacin, vitamins D and B6, phosphorus, potassium, selenium, and copper.

A lot of people wonder whether or not they can eat the stems of Portobello mushrooms, so here’s our take: the stems might be edible, but their texture isn’t all that pleasant. The stems are very fibrous and have a woody texture, so it’s best if you just discard them or use them for stock flavouring.

If you have the possibility to opt for Portobello mushrooms from the loose mushroom bin, it’s always better to do so rather than choose pre-packaged caps. This way, you can see the mushrooms and determine whether or not they’re good enough to make Portobello steaks. Make sure that the caps and stems are firm, avoiding those that are soft or shrivelled.

The structure of the gill is also something you want to pay attention to. If you hold it in the light, it should have a faint pinkish hue, as well as be dry. Don’t buy Portobello mushrooms that have dark black gills or those that seem wet. Those are signs that the mushroom isn’t that fresh anymore.

When you return home with the mushrooms for your Portobello steak, choose an open plastic bag to store them in the fridge, as they need to be well ventilated to last for as long as possible (which is usually just a few days, even when the proper storing conditions are met). The gills are the first part of the mushroom that does bad, which is why some people choose to remove them beforehand to extend the freshness of the mushrooms.

Also, keep in mind that if you want to leave the mushrooms to marinade, it’s best not to do leave them for a very long time. Their porous nature will cause the mushrooms to suck up more liquid that than they normally should. Never choose recipes that tell you to marinade your Portobello mushrooms longer than 30 minutes before it’s time to cook them.

Directions to prepare the Portobello Steaks with Mashed Potatoes: 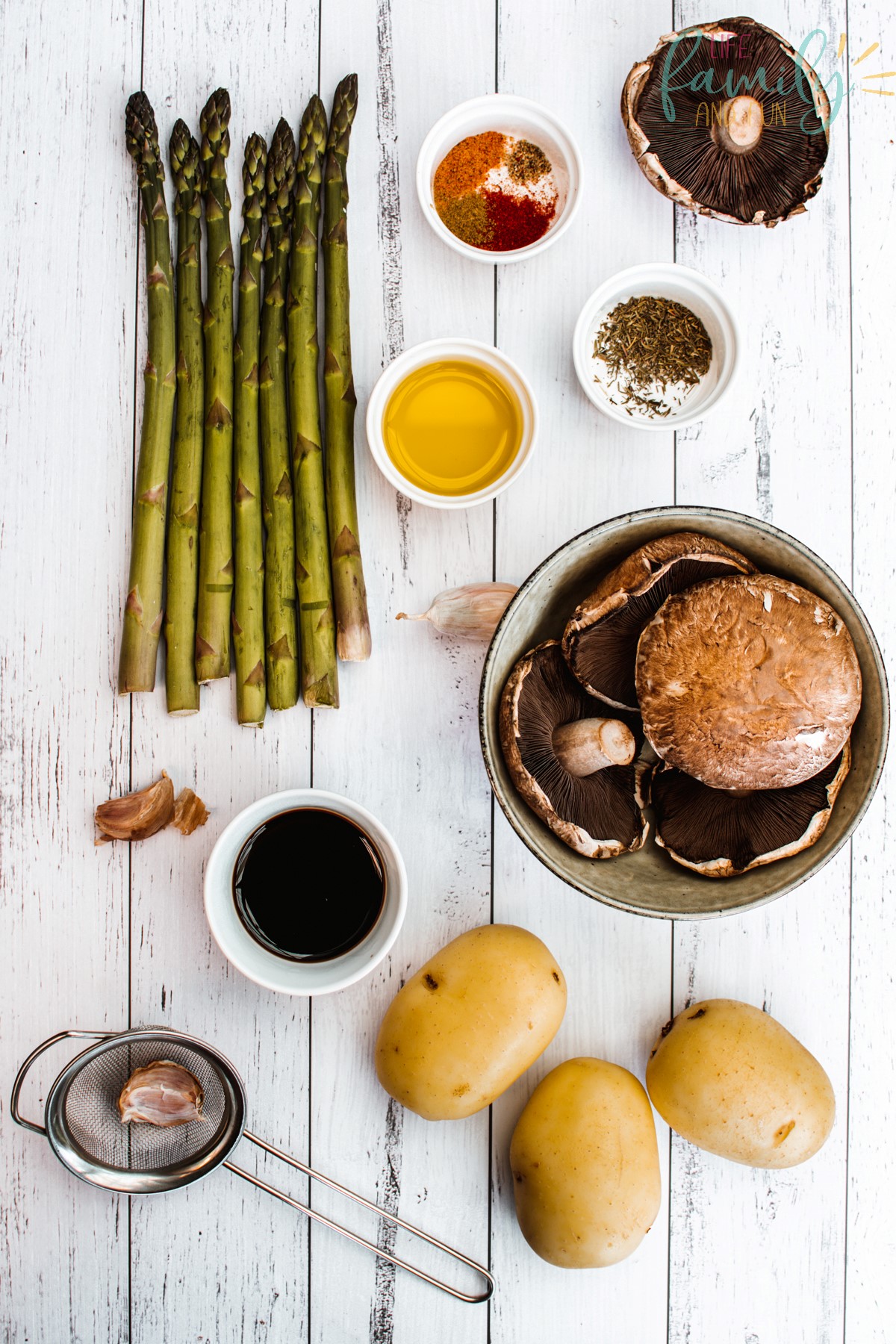 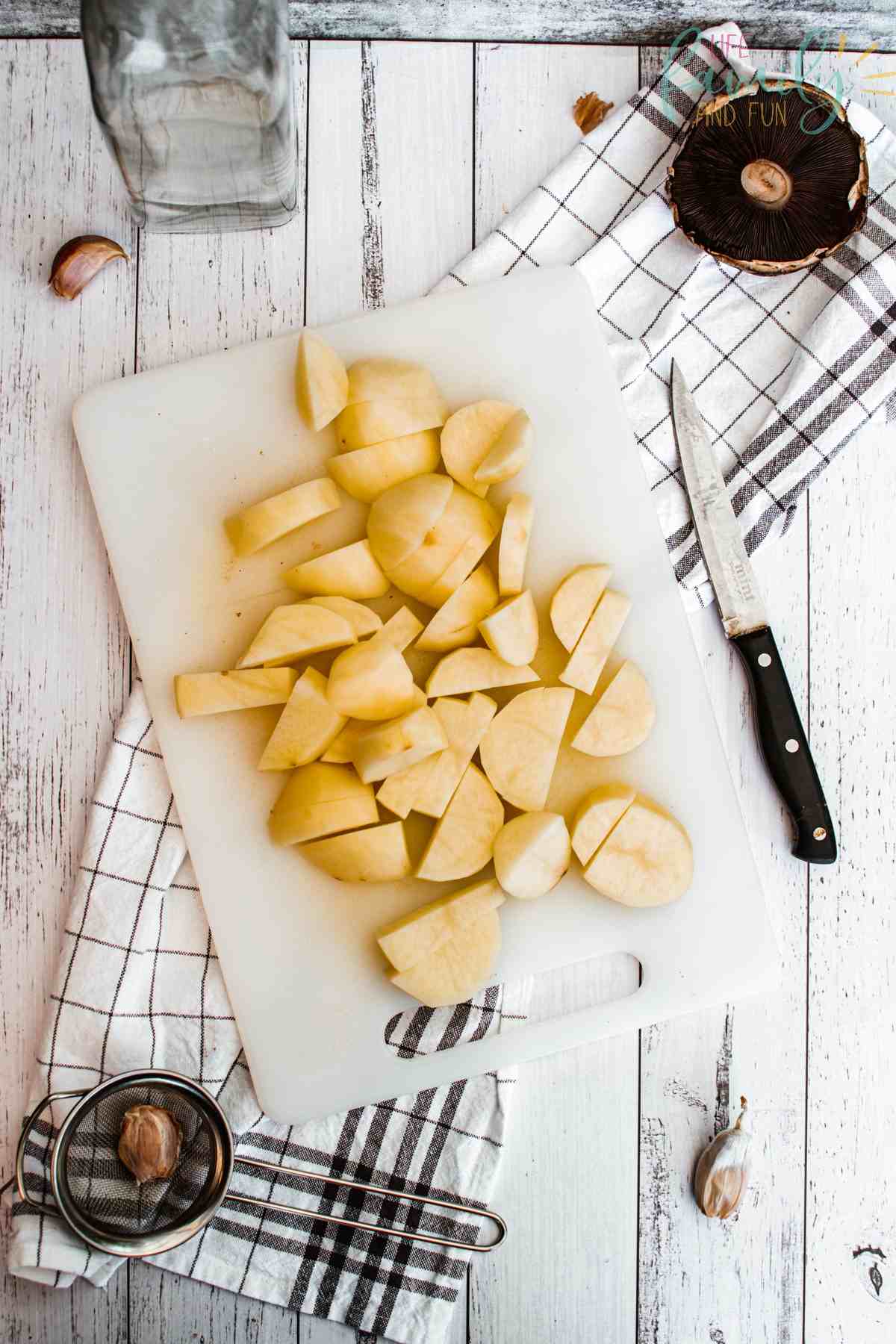 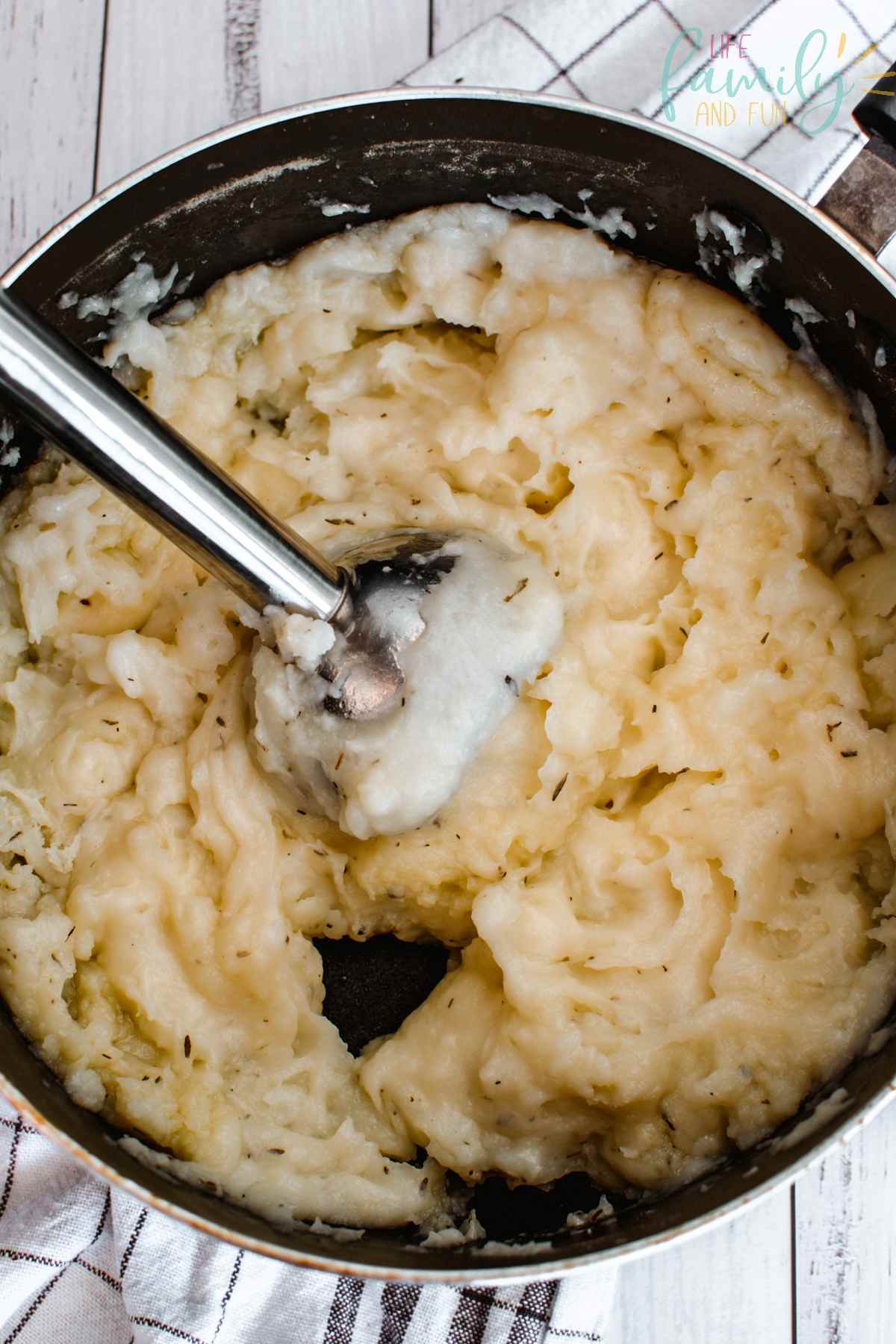 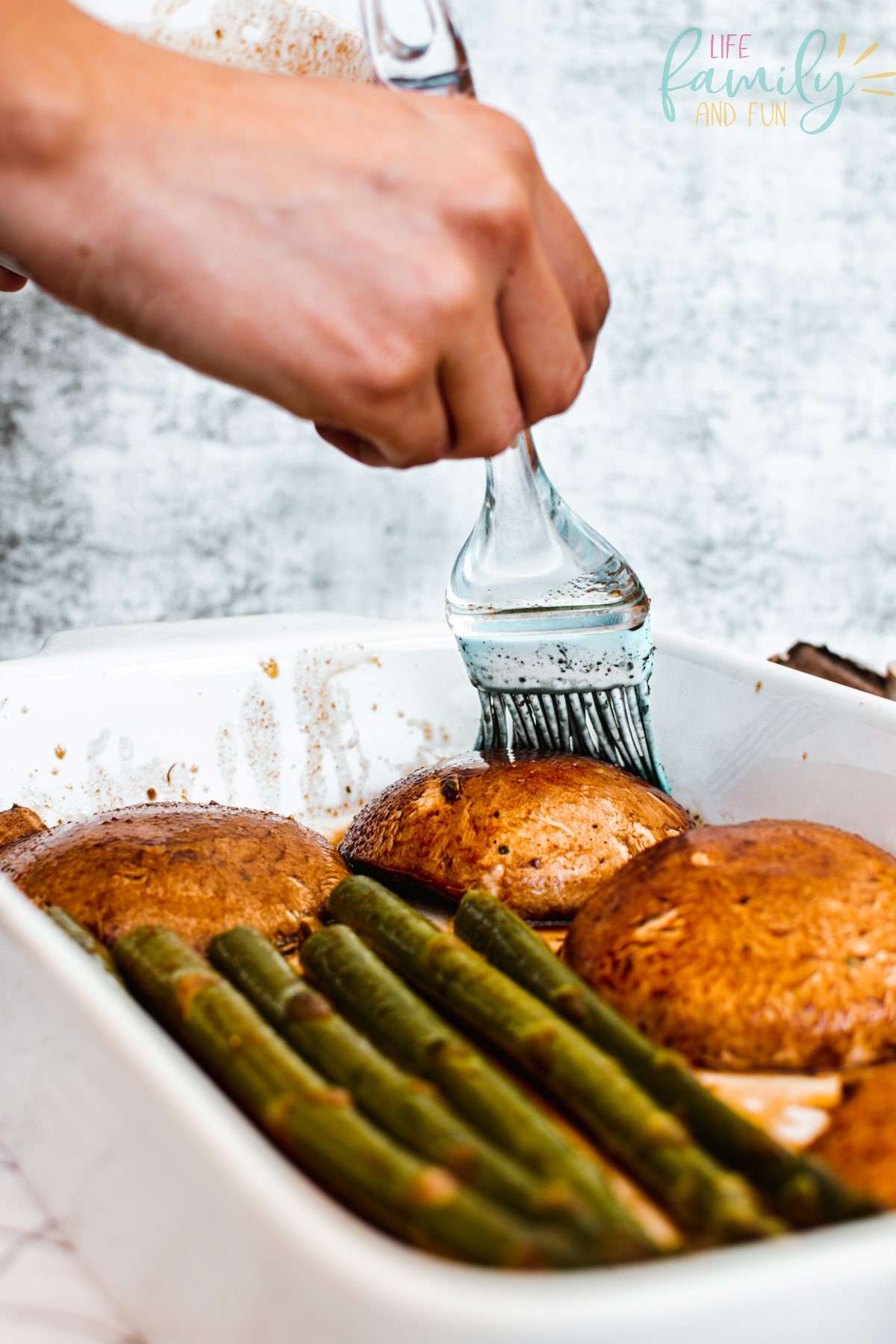 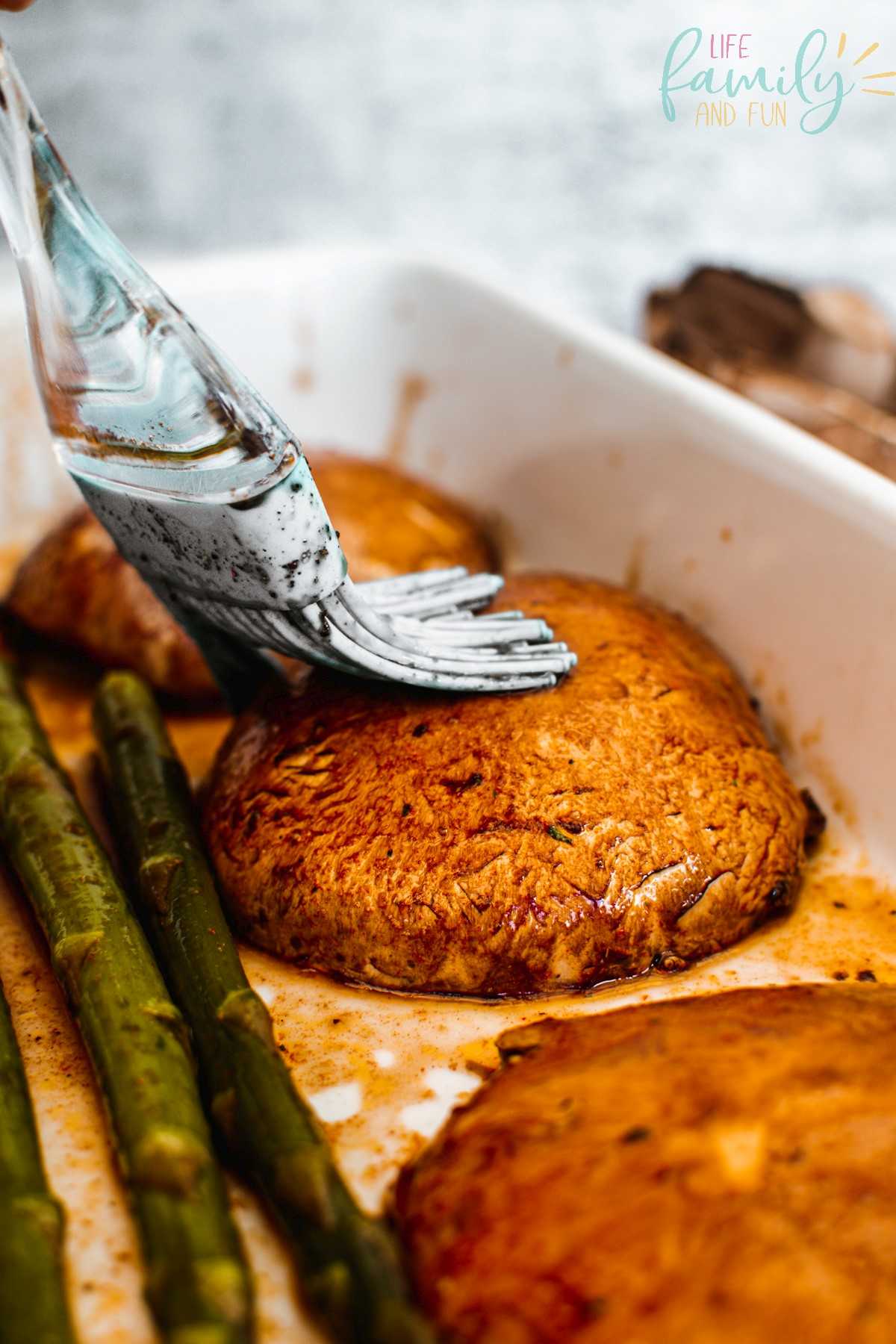 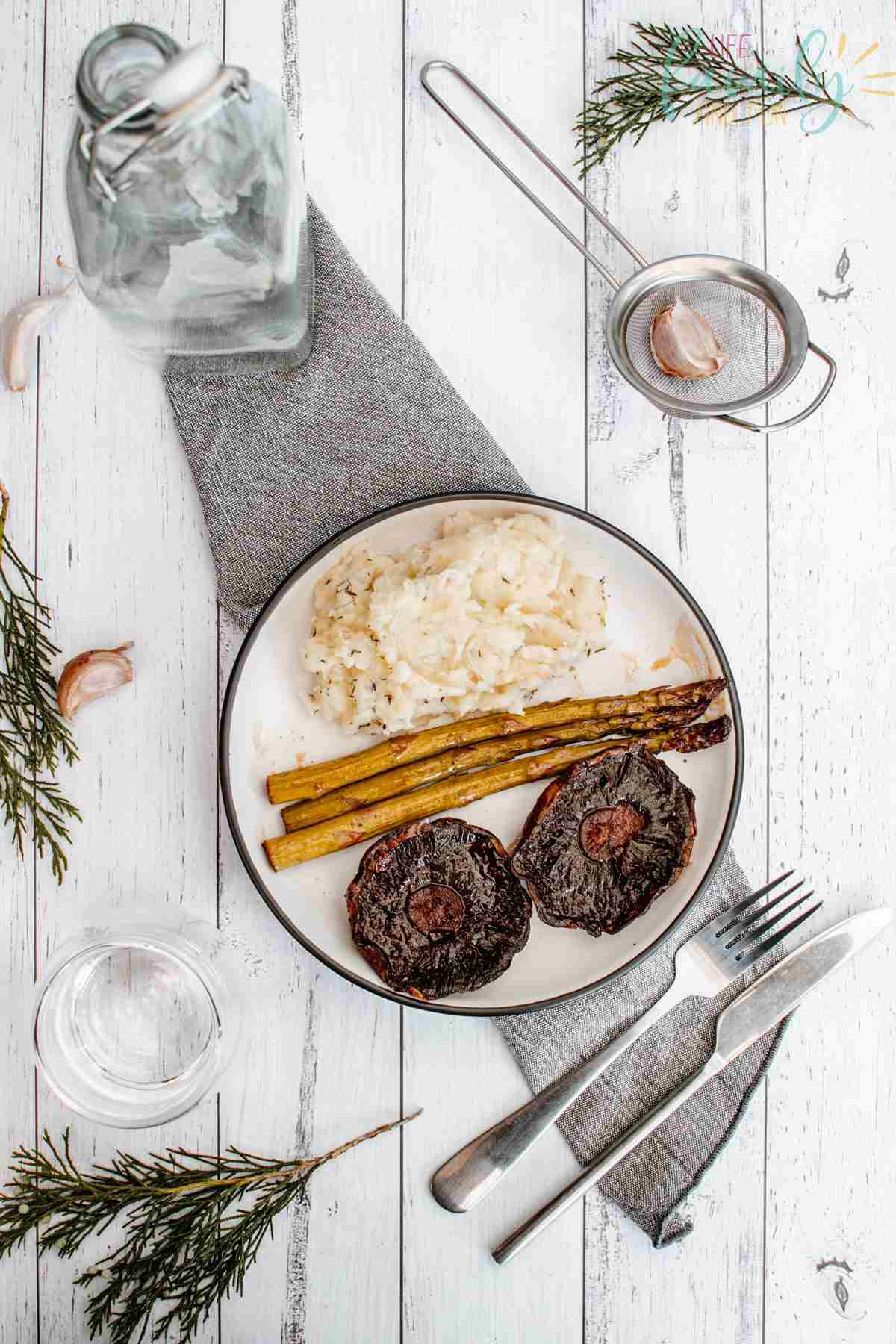 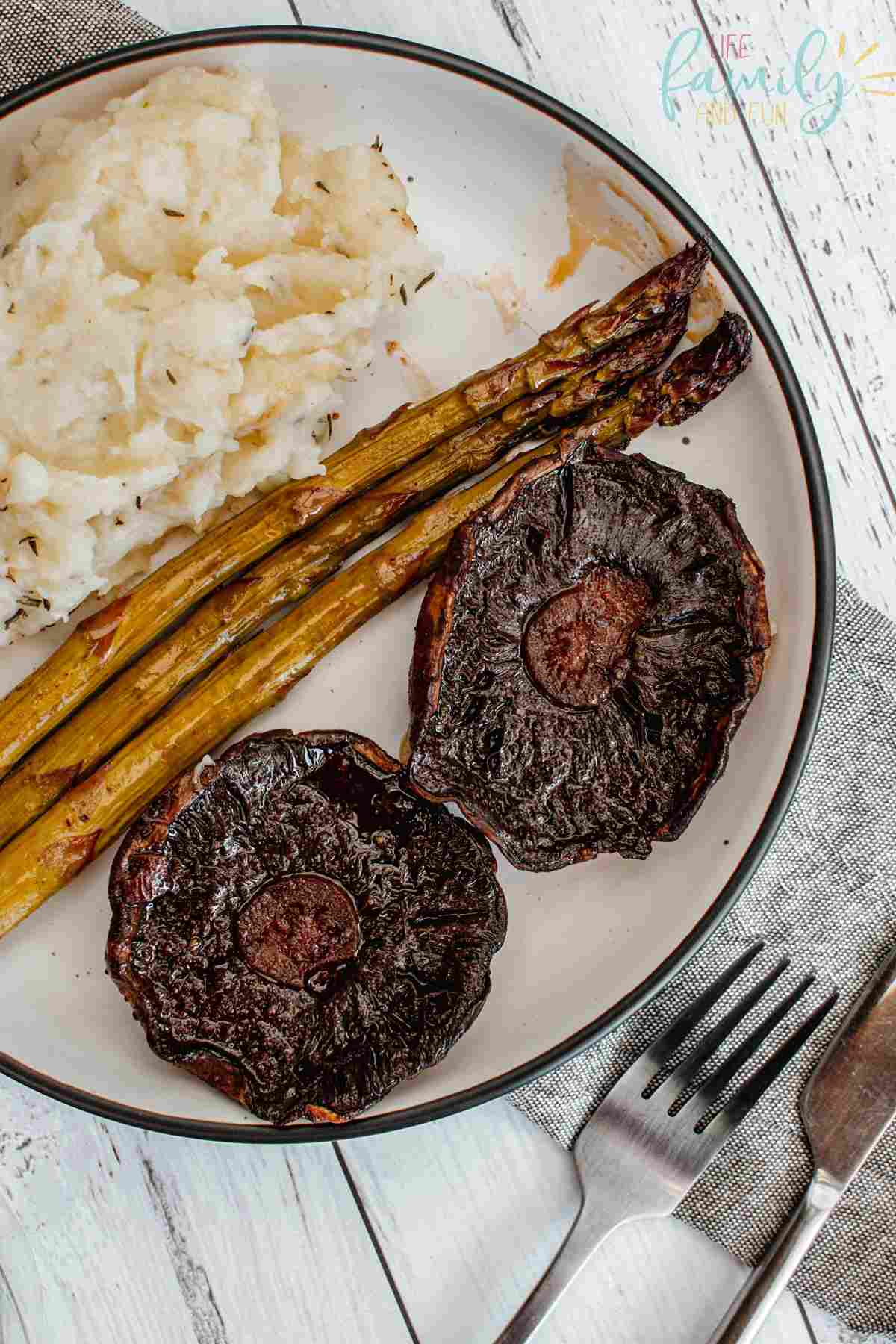 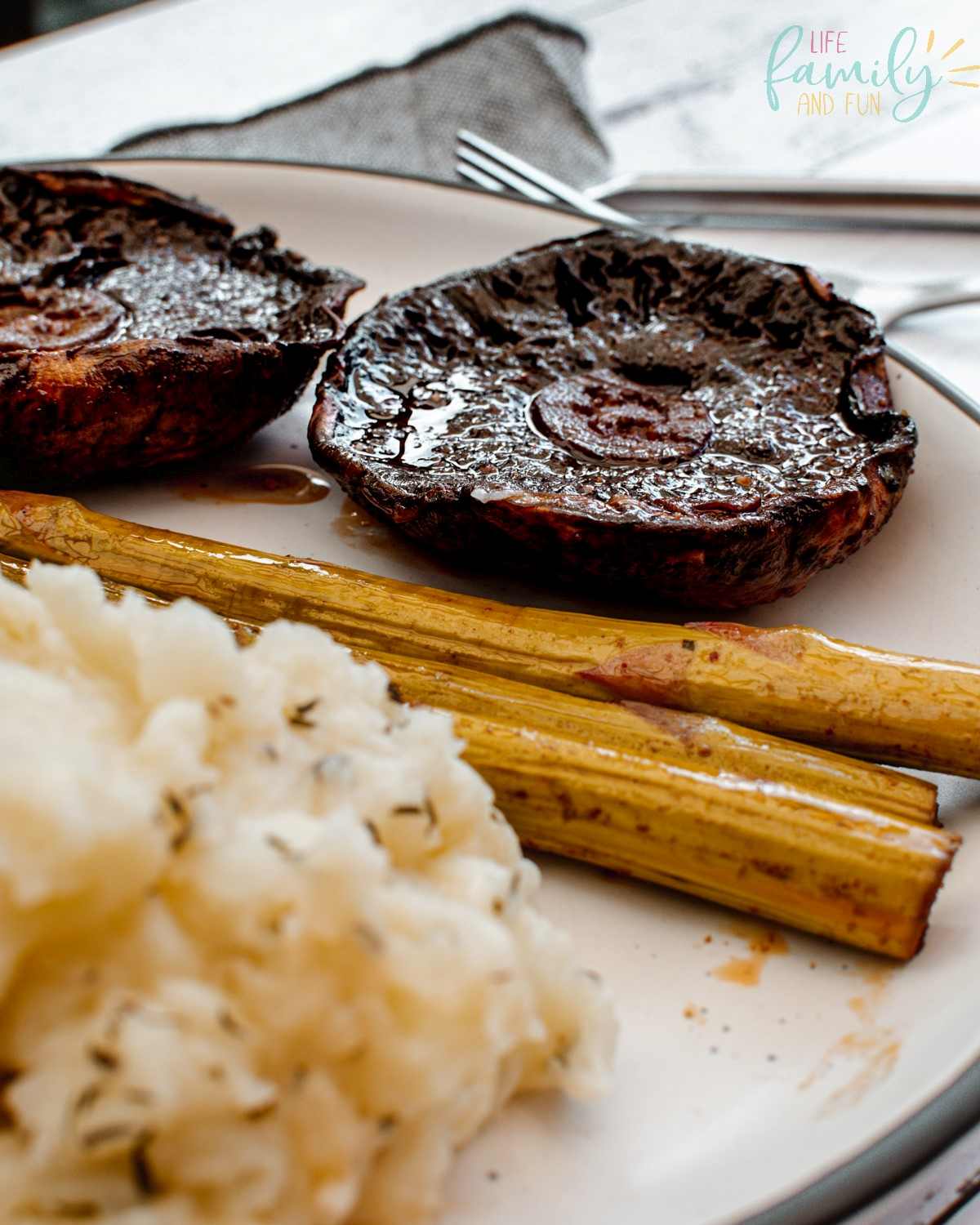 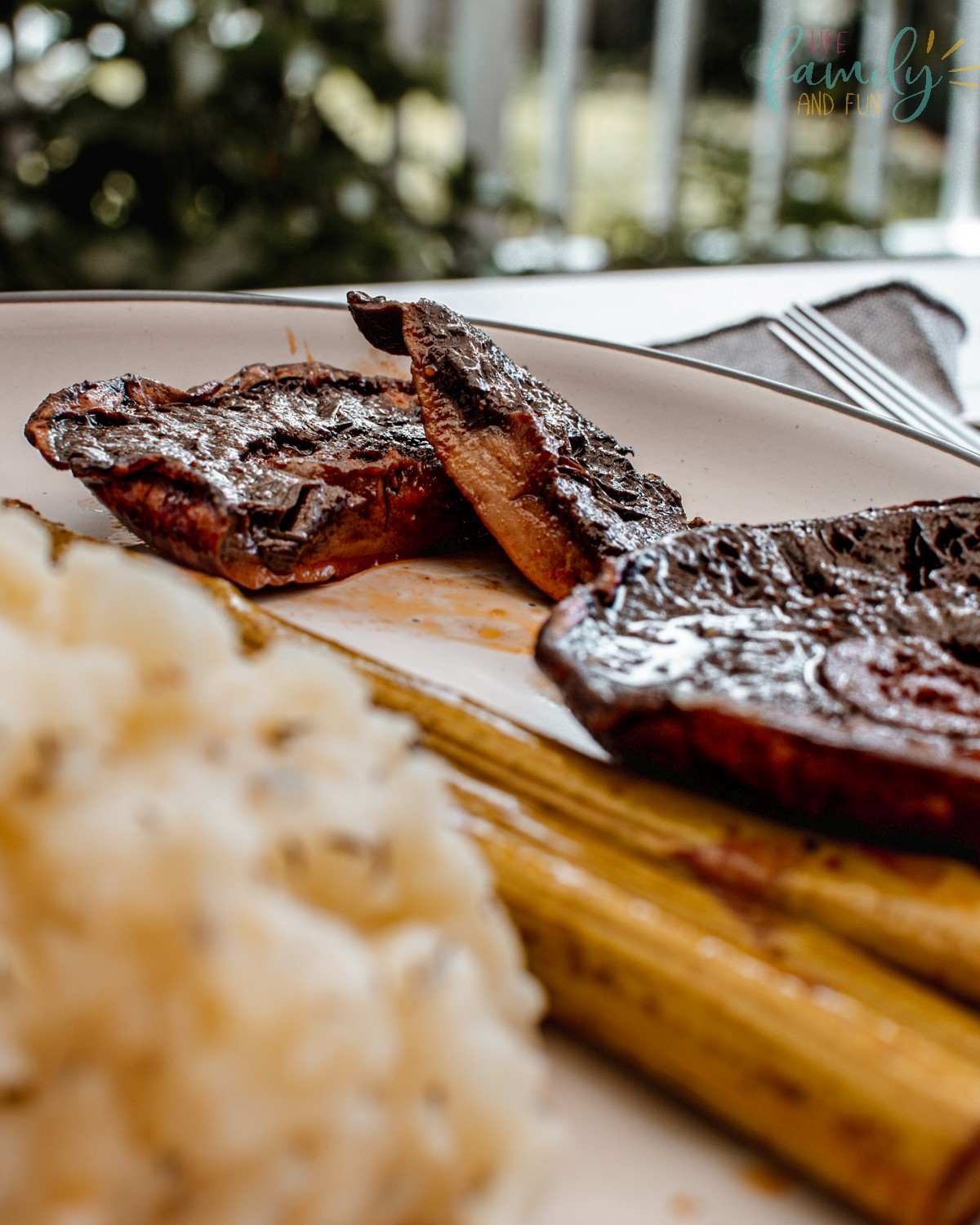 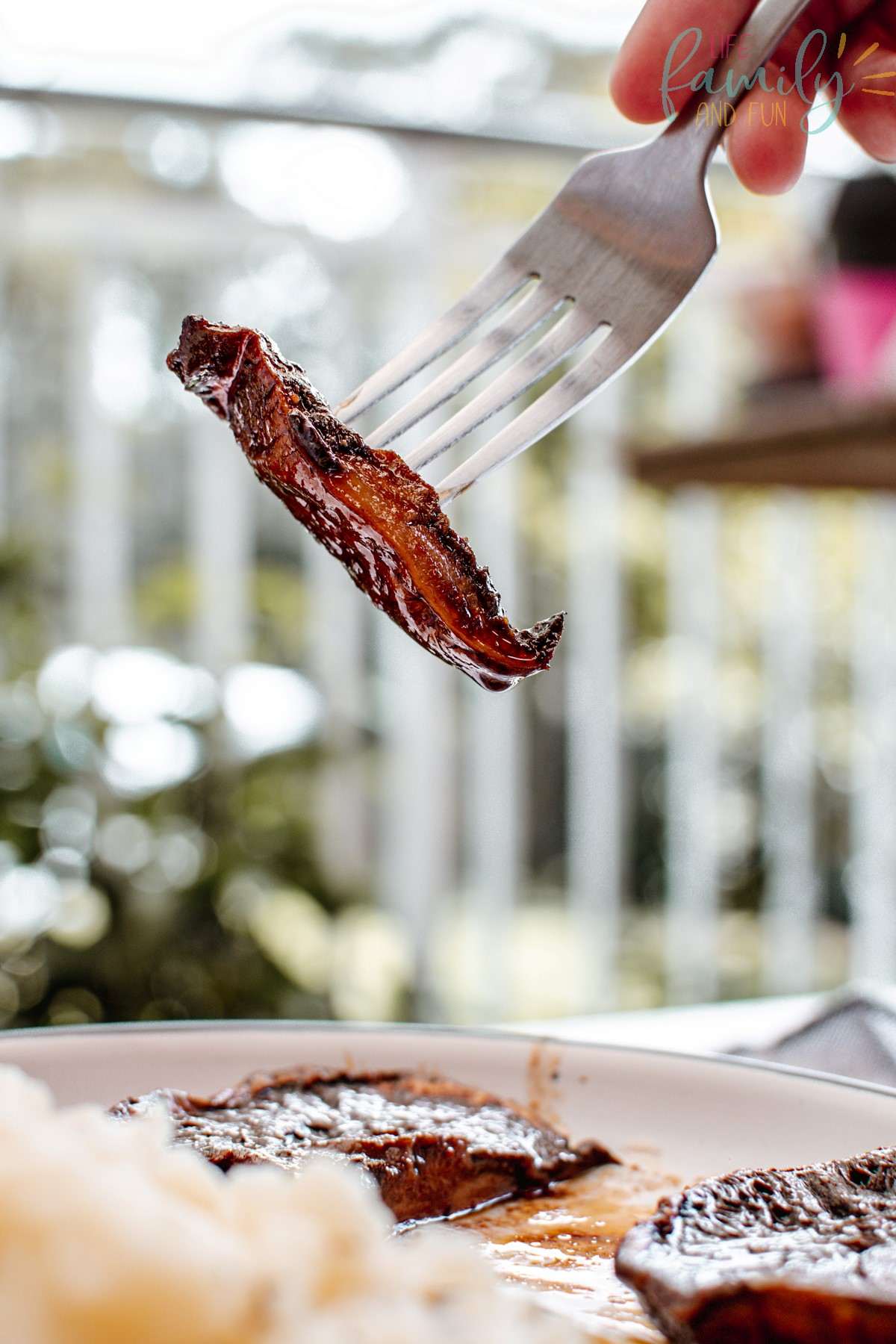 To enjoy your mushrooms while they’re still juicy, place them together with the asparagus and the mashed potatoes on plates and serve them as soon as possible. 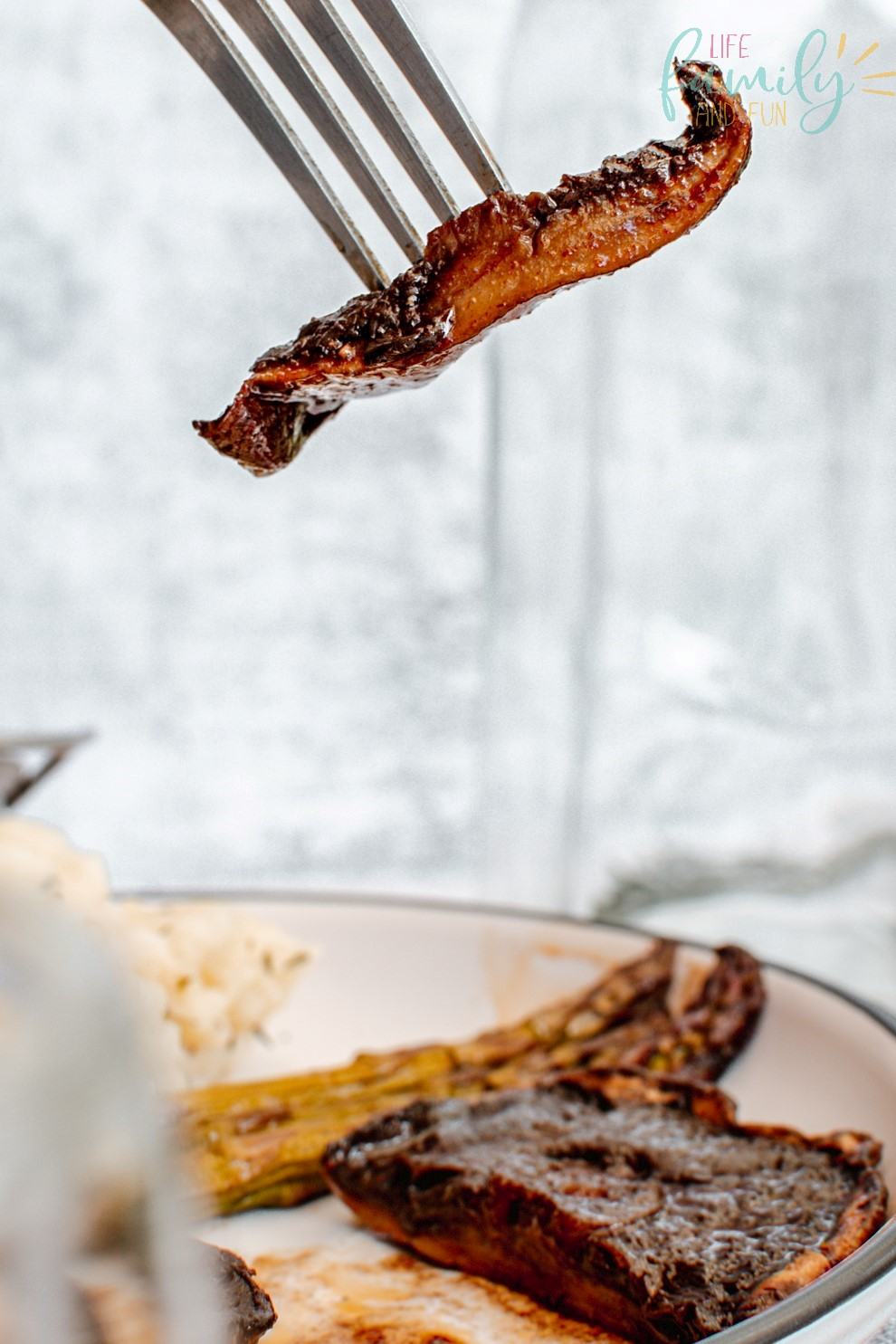 Who would enjoy this recipe?

The recipe is light and consists of healthy ingredients that could be enjoyed by anyone who is trying to lead a healthy lifestyle. While this is a vegan recipe, it’s also one that’s suitable for people following certain diets or those that usually eat meat and want to mix things up for a chance.

Can I use a different mushroom?

What other veggie pairs well with this besides asparagus?

There are plenty of different choices for those of you that are not necessarily fans of asparagus. You can prepare different kinds of roasted vegetables, bell peppers

What other potatoes or root veggies can I mash for this?

Mixing and matching flavours is something we’d always recommend to cooking enthusiasts. If you want to consume a delicious Portobello steak, you can experiment with other ingredients that can be mashed and serves alongside these mushrooms. You can make a delicious thick sauce out of mashed avocados mixed with parsley. You can also make butter bean mash as the flavours of the two main ingredients mix really well. 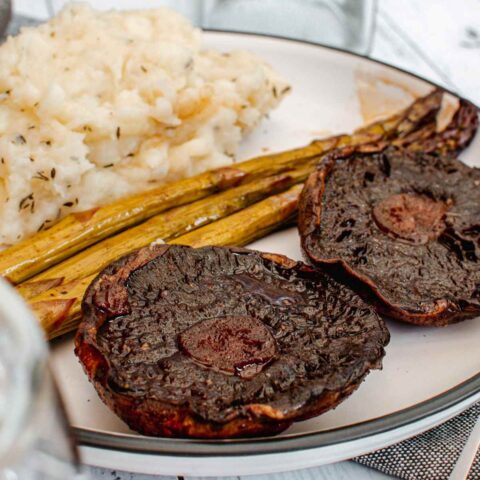 As a vegan or even as a meat-eater that wants to change up dinner habits for a bit, making this dish with Portobello steak and mashed potatoes is something that you have to try

As a vegan or even as a meat-eater that wants to change up dinner habits for a bit, making this dish with Portobello steak and mashed potatoes is something that you have to try 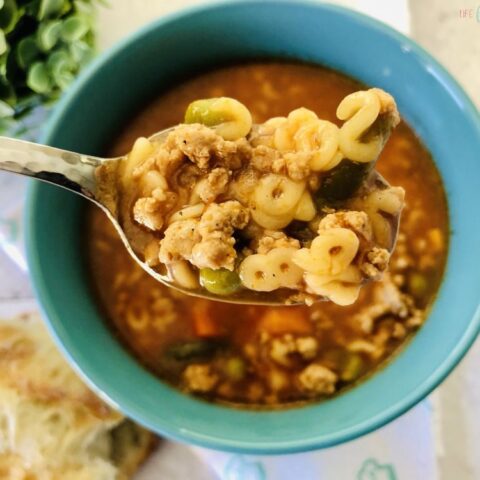 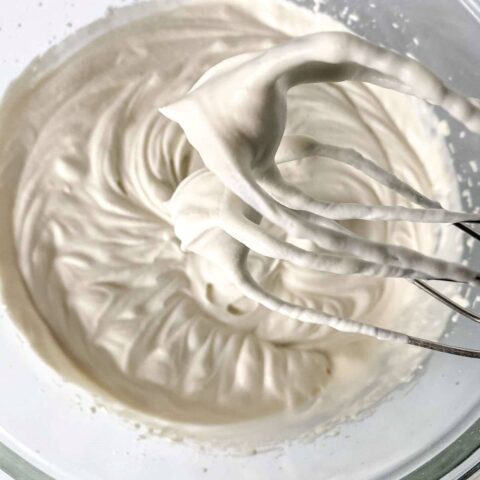 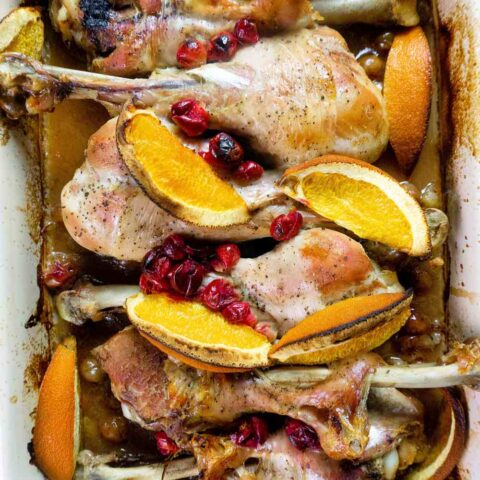