Home » 14 Best Things to Do in Santa Monica
Family Travel

If you’re in Santa Monica, California, then there’s no shortage of things to do. This coastal city is west of Los Angeles, and it’s less chaotic and more like a tropical paradise. If you love relaxing at beaches and parks, while still being close to the city, this is the destination for you. 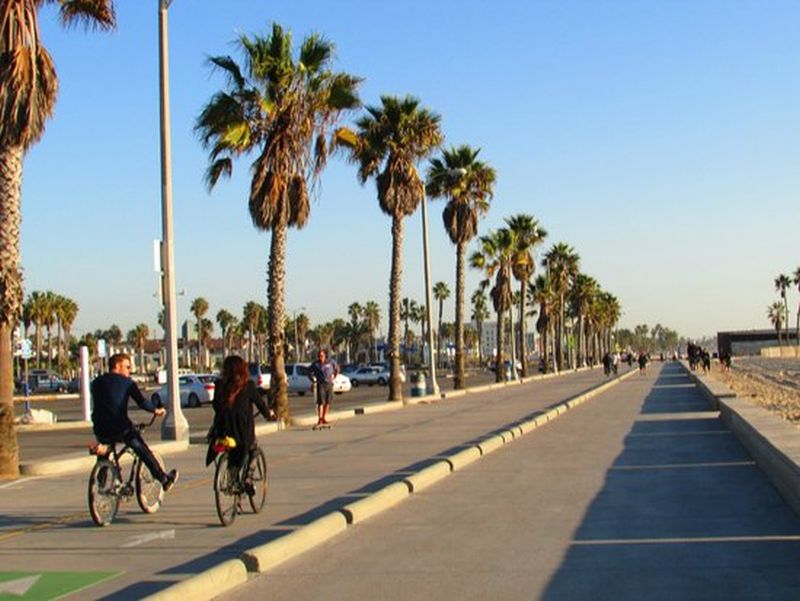 It’s not a cheap area to live in, but it’s certainly worth of a visit if you love warm, sunny places.

Here are 14 of the best things to do in Santa Monica to help you plan your trip. 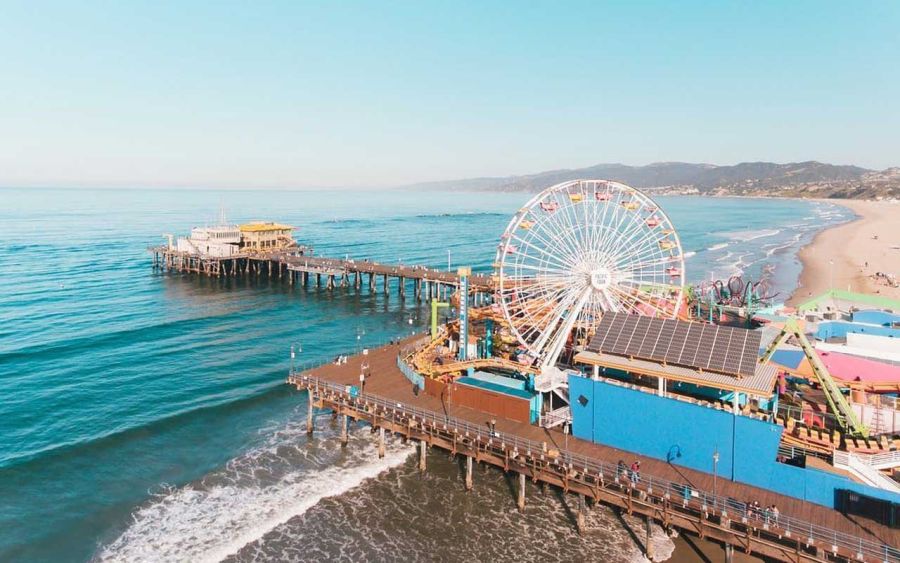 The pier is the most iconic attraction in Santa Monica. There are several attractions located on this 100-year-old pier, including Pacific Park, which is a fair with a roller coaster, Ferris wheel, and carnival games. You’ll also find an aquarium, souvenir shop, and bike rental location. Of course, many of the exciting events on this pier cost extra, but you can walk around it for free. Plus, the whole family is welcome, even pets! 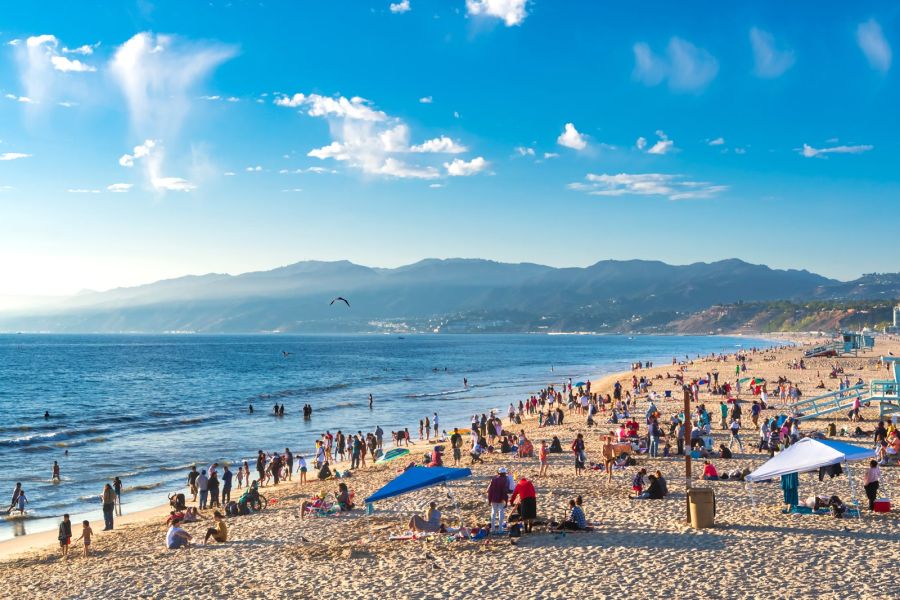 The gorgeous Santa Monica State Beach divides the water from the city. It’s on both sides of the Santa Monica Pier, and it stretches for about three and a half miles. Of course, some visitors love to just relax or swim during their time at the beach, but there are plenty of other things to see and do. Along the beach, there are lifeguard stations, playgrounds, volleyball courts, bike rentals, chess tables, picnic areas, paths, and other water rentals. 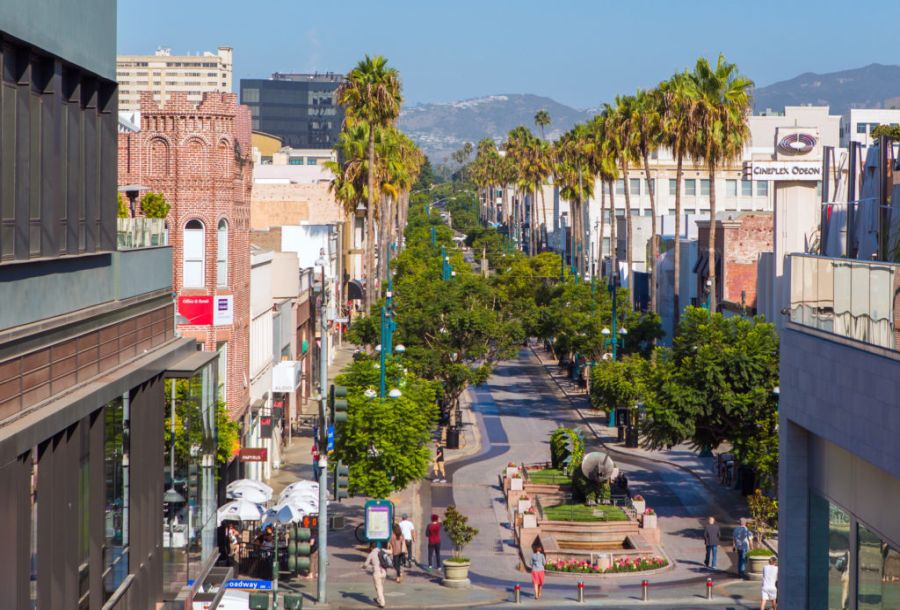 The four blocks in the center of downtown Santa Monica are known as Third Street Promenade. It’s closed off to cars so people can more easily explore the busy streets. It’s lined with plenty of shopping and dining options. Of course, many events are held in this area too, such a farmers markets and live music. It’s basically an outdoor shopping mall that’s exciting to explore. 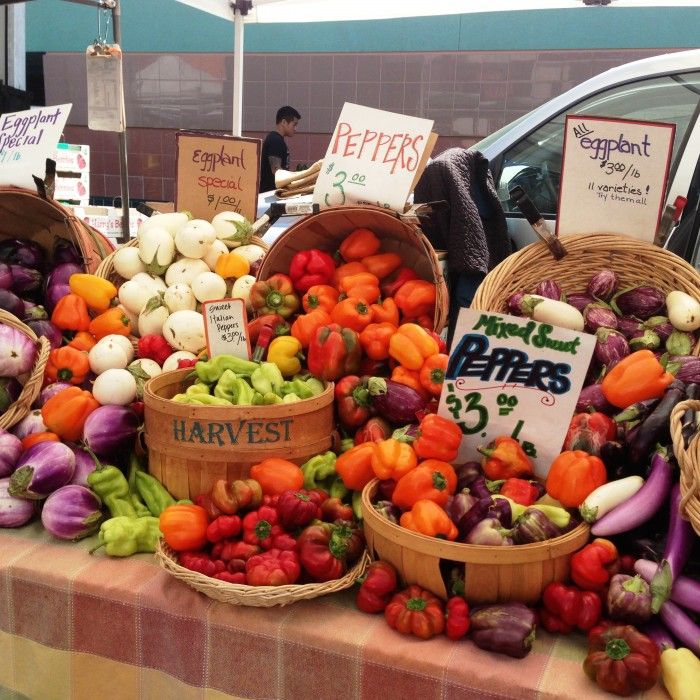 The Santa Monica Farmers Market operates several days of the week, but it’s often in different areas of the city. It has been a successful event in California since 1979. You can find items like flowers, produce, cheese, meat, and nuts at these events. However, you can still have fun exploring even if you’re not planning to spend money. There are often live musicians and cooking demonstrations at these events too.

Biking is one of the most popular things to do in Santa Monica. There’s no shortage of places to bike, but one of the best spots is the South Bay Bicycle Trail. It’s a 22-mile trail that goes along California’s beautiful coast. It’s even known as the longest oceanfront bike trail in the world. You’ll pass through many coastal towns and landmarks, including the Venice Boardwalk and Venice Pier. 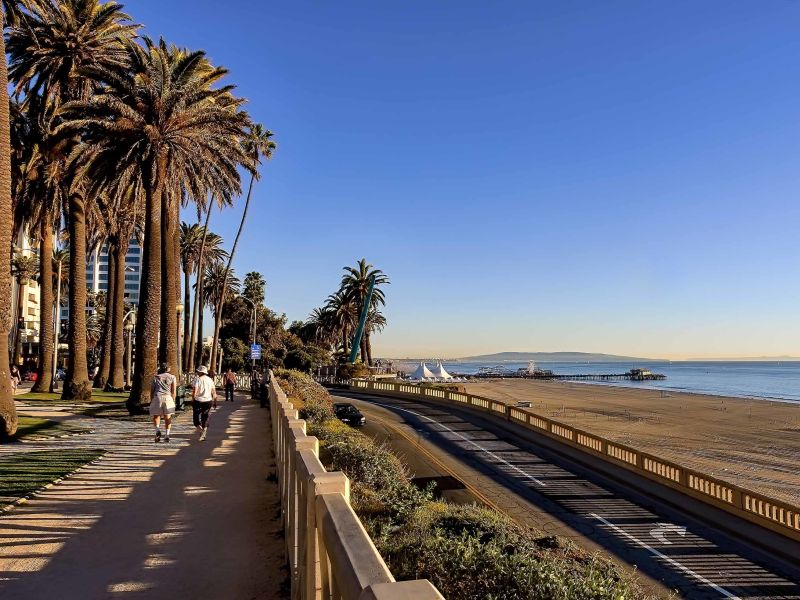 Palisades Park is considered a hidden gem of Santa Monica. It’s a public park area that overlooks the ocean with some of the most gorgeous views. While it’s a narrow park, it still stretches for about 26 acres. It was established in 1892, but has received a lot of paved paths and beautiful landscapes since then. Throughout the park, there are plenty of seating areas, so you can stop and admire the views while you’re exploring. 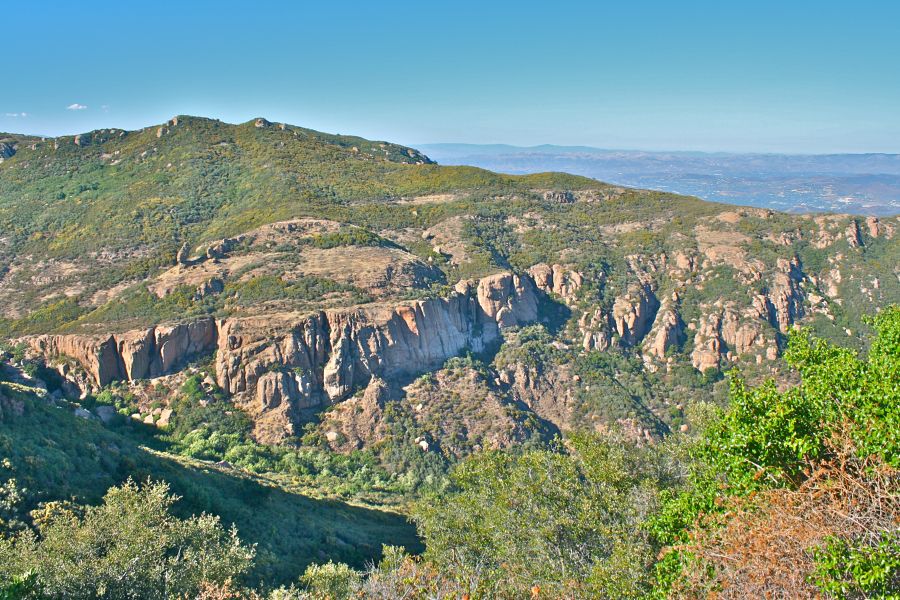 Nature lovers’ jaws will drop when they see the wonderful Santa Monica Mountains. This nature space is supposedly one of the most beautiful areas in the country. These green-covered mountains reach the ocean in a way that looks like a postcard. There are plenty of ways to access these mountains, with over 500 miles of hiking trails. Many guests partake in other activities during their visit too, such as horseback riding, rock climbing, surfing, mountain biking, and camping. 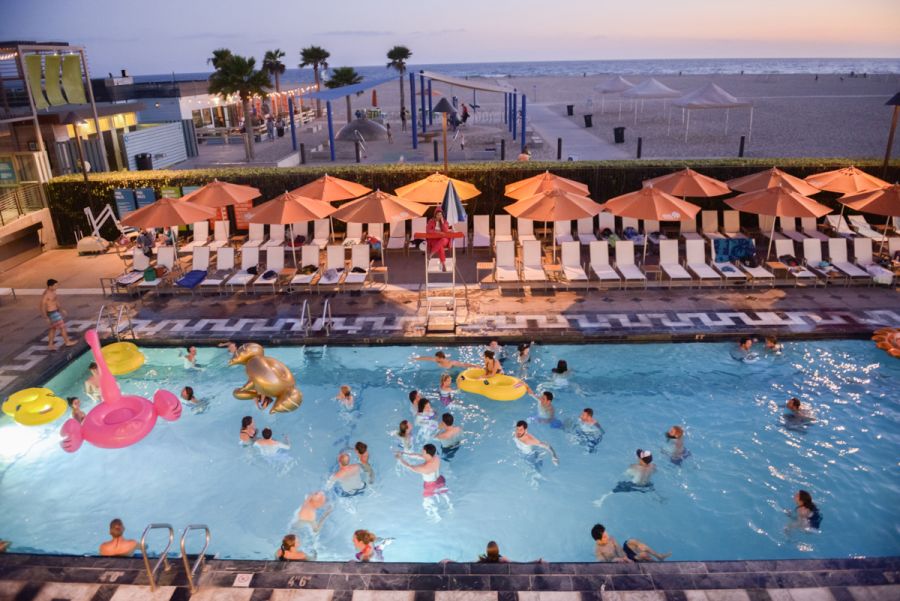 This elegant beach house was once a privately-owned estate from the 1920s, but now it’s open to the public. It’s located north of the Santa Monica pier. At this beach house, you’ll find lots of attractions, such as a pool, an art gallery, playgrounds, a splash pad, volleyball courts, and soccer fields. It’s the ideal place to hang out with your family if you’re having a beach day. 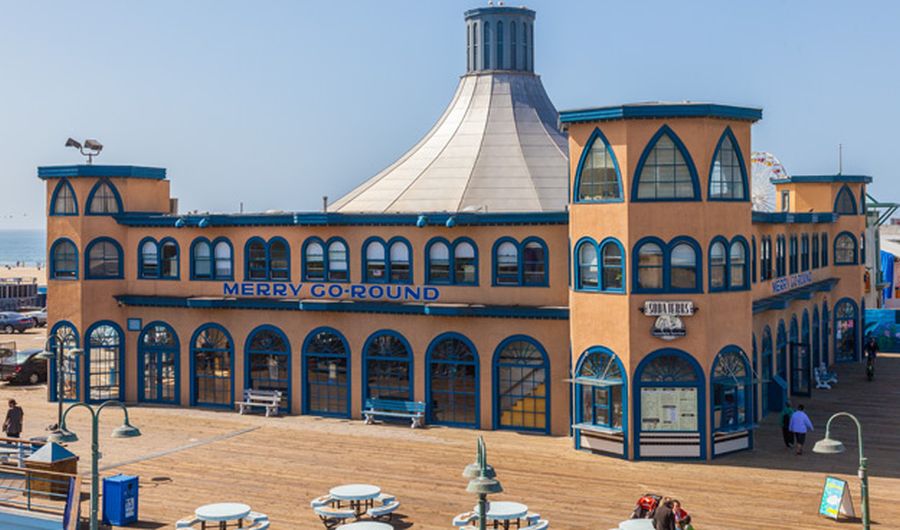 Looff Hippodrome is also located right next to the Santa Monica Pier. It’s a large, open-air structure that’s also considered a historic landmark. It was once used for horse racing. Today, it’s a small family amusement park, including rides, shops, restaurants, and games. It was built by and named after a German man known as Charles Looff in the late 1800s. Unfortunately, the classic carousel that Looff created was replaced in 1922. 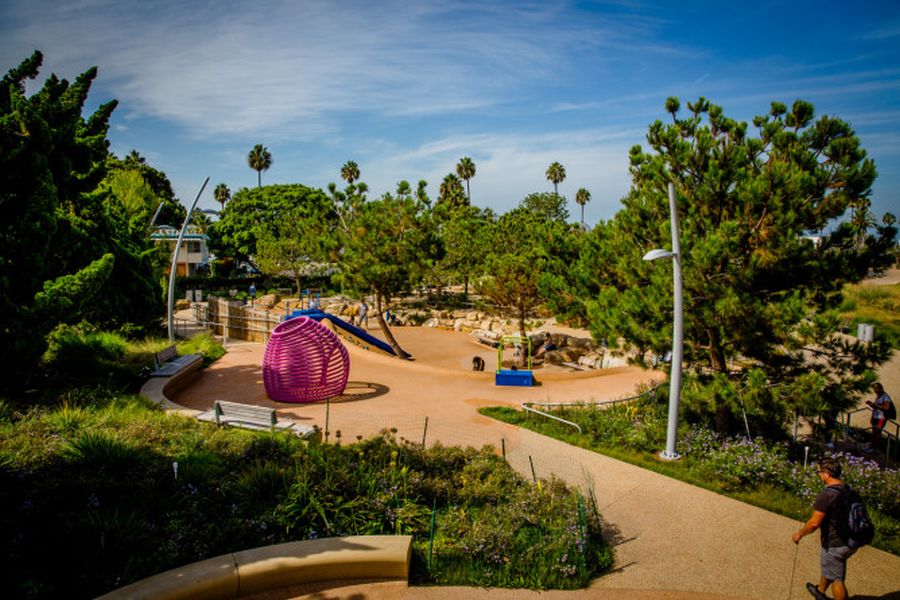 A few years ago, Tongva Park was nothing but a boring parking lot. Now, it’s a 6-acre oasis that visitors love to explore. Some plants, fountains, and unique sculptures helped make it interesting and appealing to the public. Plus, it has some excellent photo opportunities of the California coast. Some fun attractions at this park include a splash pad, picnic areas, paths, and an amphitheater. 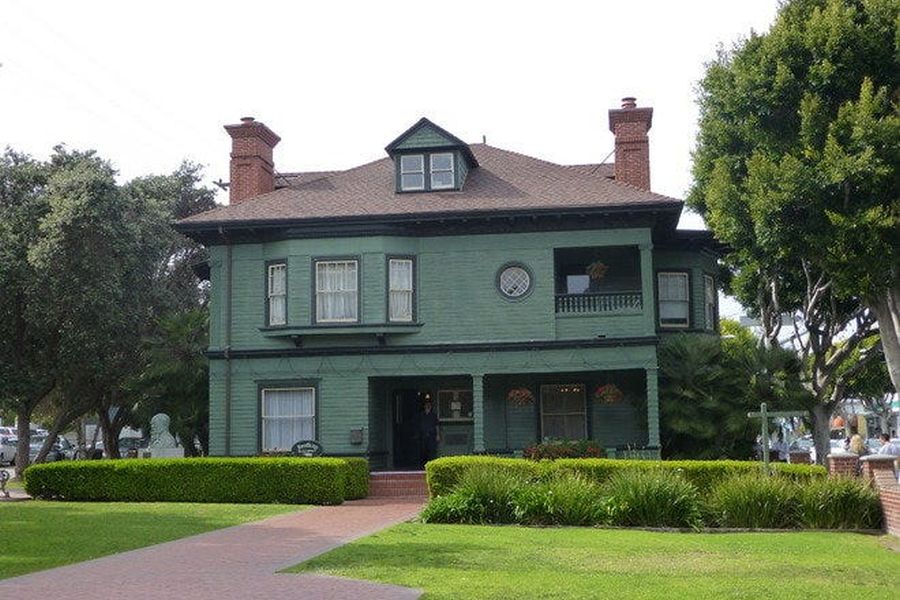 If you’d rather spend your time indoors, then the California Heritage Museum will be one of the best things to do in Santa Monica for you. It’s inside of a gorgeous home from the Victorian era, which is also known as the Roy Jones House. If you take a tour of this museum, you’ll get to admire the house’s architecture while also learning a little California history. The museum is full of photos, artifacts, and documents. One of the permanent exhibits even focuses on the family who once lived on this property. 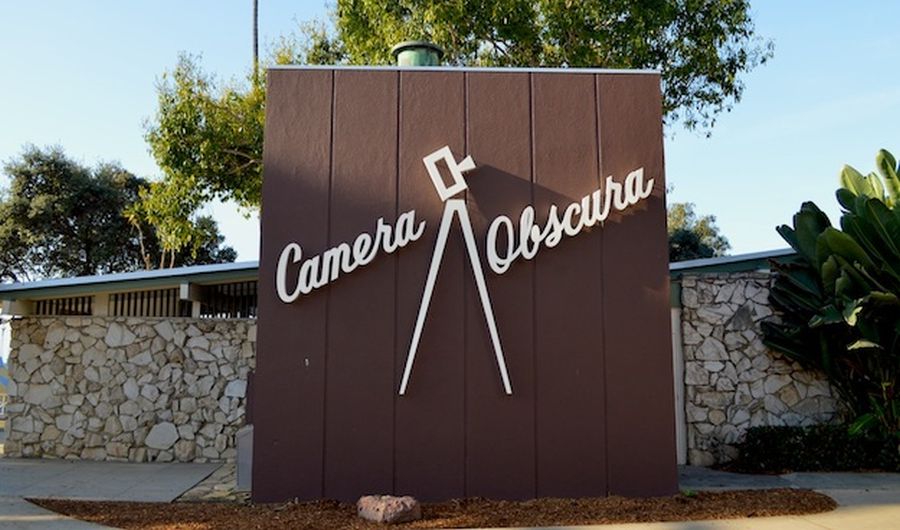 Artists adore the Camera Obscura Art Lab since it’s a great place for hands-on activities. It’s near Palisades Park, and anyone can take advantage of the art studio space. The most popular area of the attraction is a small room that allows you to view unique images of what’s happening outside of the building. It’s believed to be one of the world’s first optical inventions, and it’s difficult to imagine it without experiencing it. Classes and workshops are sometimes offered there as well. 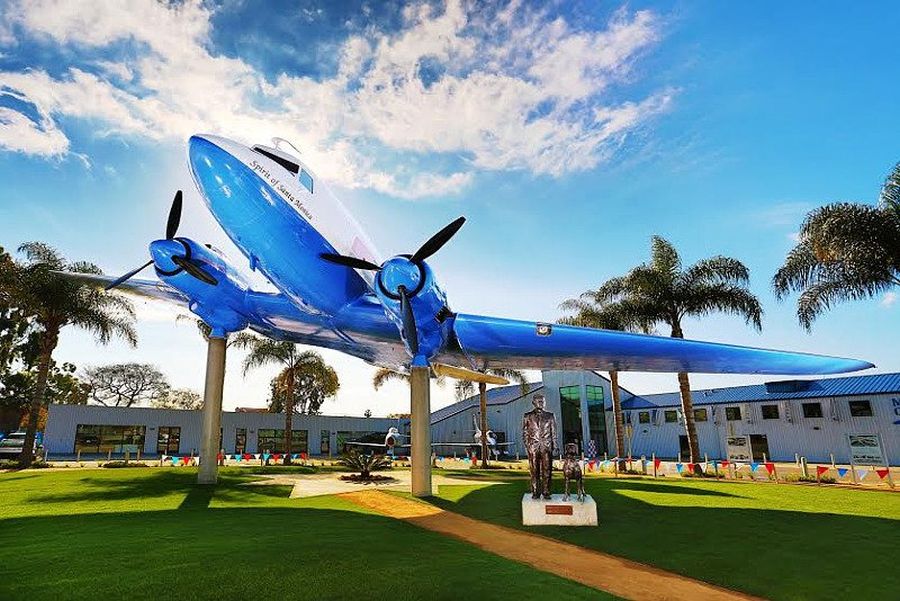 As the name implies, the Museum of Flying is all about the history of aviation. It’s located in a 22,000-square-foot space just outside of the Santa Monica airport. The museum has about two dozen large aircrafts, along with artifacts and historical documents related to the planes. For hands-on learners, there are also many interactive exhibits, including an interactive flight simulator. 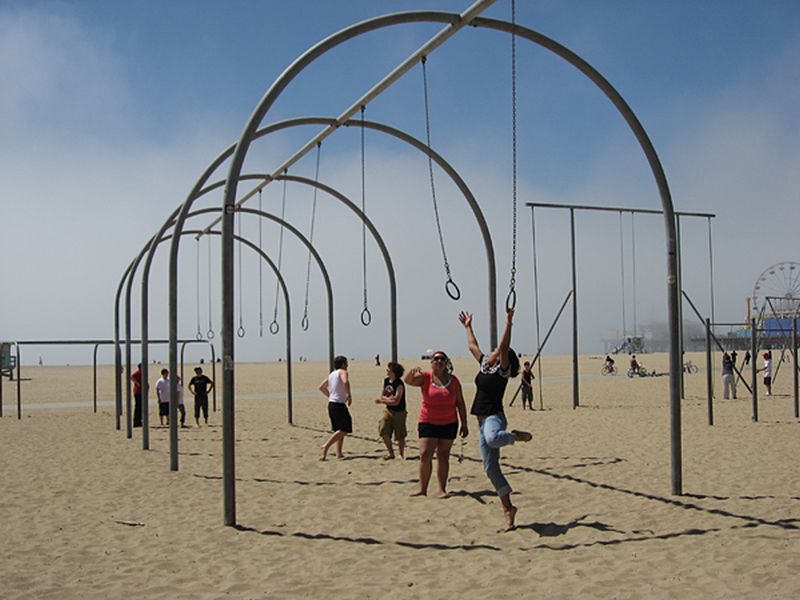 The Original Muscle Beach isn’t as peaceful as your average beach. Instead, it’s a sandy workout playground where adults can exercise. If you walk through it, you’ll see gymnasts taking advantage of the various rings and bars. Plus, you’ll likely be surrounded by many muscular individuals. However, this park is known for its friendly environment. So, no matter how much you participate, you won’t be judged for your skill level.

If you’re looking for an exciting waterfront area of California to visit, why not check out Santa Monica? There are tons of fun things to do in Santa Monica, especially if you love spending time in the sun. If you’re unsure where to start, consider adding some of these beloved attractions to your vacation plans.