The Atlanta Braves Have A New Home at SunTrust Park

The Atlanta Braves have a new home, SunTrust Park. It’s a ballpark unlike any other.  SunTrust Park is actually smaller than Turner field with 41,000 seats.  But don’t let the smaller size fool you for there is big entertainment.

Every seat is a great seat but for those who want a premium experience, you can request SunTrust Club (SunTrust Club is the most exclusive seating environment in SunTrust Park), Delta SKY360 Club (including access to a 15,000-square foot hospitality club with state-of-the-art technology layered with rich natural materials), and the Terrace Club (This casual club environment features a signature bar, two additional full-service bars and upscale food and beverage options) all with the best seats in the house.

While you are allowed to bring in your own food you won’t want to when you see all the options available.

Of course you will still find ball park staples like peanuts, fries, cotton candy and popcorn.

A big hit with families is Hope & Will’s Sandlot.  This is a kid-friendly area hosted by Children’s Healthcare of Atlanta.  In this area, you will find:

Hope & Will’s Sandlot is open before, during and after the games; so if you have a restless one, no worries.  Or maybe as a reward after?  Visitors will be able to use the new Braves app to reserve a timeslot to access both of these attractions.

The Monument Garden, located on the lower level behind home plate, holds many of the franchise’s prized jewels.  At the heart of the garden is a statue of Braves legend Hank Aaron hitting his Babe Ruth-record-beating 715th home run. The statue was created by Bulgarian-born artist Ross Rossin who now lives in Atlanta.

There are plaques to honor the 31 players, managers, coaches and others in the Braves Hall of Fame. Something you would normally only see in Cooperstown.

A fan favorite is back. Presented by Children’s Healthcare of Atlanta, kids 14 and under can line up and run around the bases just like the Braves!  Every Sunday after a home game, you can be the coolest parent ever.

Parking  and How To Get To SunTrust Park

Despite having fewer seats, there are now more parking options.  14,000 to be exact.   Those with premium seating will have special spaces and all parking can be paid in advance online. If you don’t pay ahead, there are five lots that accept credit card payments (no cash accepted).

Don’t want to drive? Take UBER! Uber’s partnership with the Braves offers fans the only way to get directly from their door to the door of the ballpark at an affordable price. Estimated wait times for an Uber across Metro Atlanta average less than five minutes.  A dedicated Uber Zone for drop-off and pick-up makes getting to the game and home a breeze.

To check out the Braves schedule and to buy tickets, visit their website here.

The onUp Experience at SunTrust Park 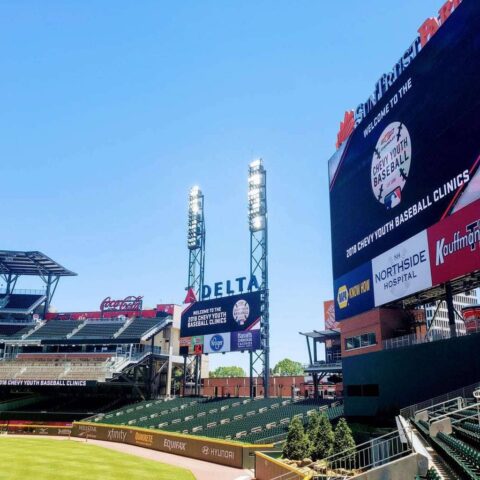